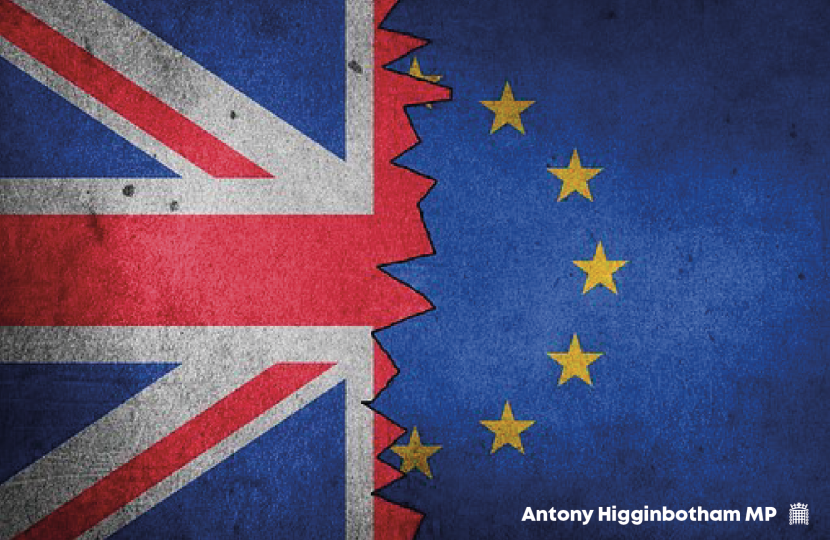 Negotiations with the EU have always been known to go down to the wire and this year was no different, with the Prime Minister announcing on Christmas Eve that a deal had been reached.

Over the last 11 months there have been many who said that it would simply be impossible to reach an agreement before the end of the transition period; that we should extend the transition, take no deal off the table, and abandon our red lines and accept whatever the EU offers. The Prime Minister has shown that with grit, determination and a genuine desire to walk away if our sovereignty is not respected, a deal could be reached.

Since Christmas Eve I’ve gone through the agreement line by line, ensuring that it delivers on the promises I made to people across Burnley and Padiham just over a year ago. And it does.

The new UK-EU agreement is one focused on trade, not a pooling of sovereignty. Gone are the days of ‘ever closer union’ and instead we move forward as equal partners with tariff-free and quote-free trade between us worth over £660 billion.

There were some tough issues, particularly in relation to fishing, governance and competition rules. But we have held firm on our red lines. The agreement makes crystal clear, in black and white, that there is no role for the European Court of Justice. The agreement will be enforced by our domestic courts in the UK – as it should be.

It also recognises, explicitly, that from 1 January 2021 we are an independent coastal state in full control of our territorial waters. After 40 years of decline under the Common Fisheries Policy, we also need to support fishing communities to realise these benefits. As part of that the Government will be putting in place up to £100 million of support to help modernise the fleet and fish processing industry and build sustainable operations and healthy stocks. This is the right thing to do and will ensure that we can fully take advantage of the fishing opportunities that will open up to us.

And on competition, or ‘level playing field’ we have held firm on the line that we will not be tied to the EUs regulatory orbit. As a sovereign nation we have the right to regulate in a way which works for us.

It has been four years since the EU referendum where the country, including residents of Burnley and Padiham, gave a simple instruction – that the UK should leave the European Union. My very first vote was to deliver on that, implementing the Withdrawal Agreement. Since then our focus has been on securing a free trade agreement with the EU and putting Global Britain on the map with other deals.

Those other deals are also significant. Many have gone under the radar, without much fanfare, but since we formally left the EU on 31 January 2020 the Department for International Trade has been working tirelessly. 59 countries from South Korea, Japan and Vietnam to Switzerland, Canada and Turkey have agreed new bilateral deals with us, securing preferential trade access. The work doesn’t stop there either.  We are now looking ahead as a global trading nation to deals being done with Australia, New Zealand and the USA amongst others.

The UK has not been at the back of any queue, instead showing that we remain an attractive place to invest and do business and highlighting the value that our partners attach to the ‘Made in Britain’ brand.