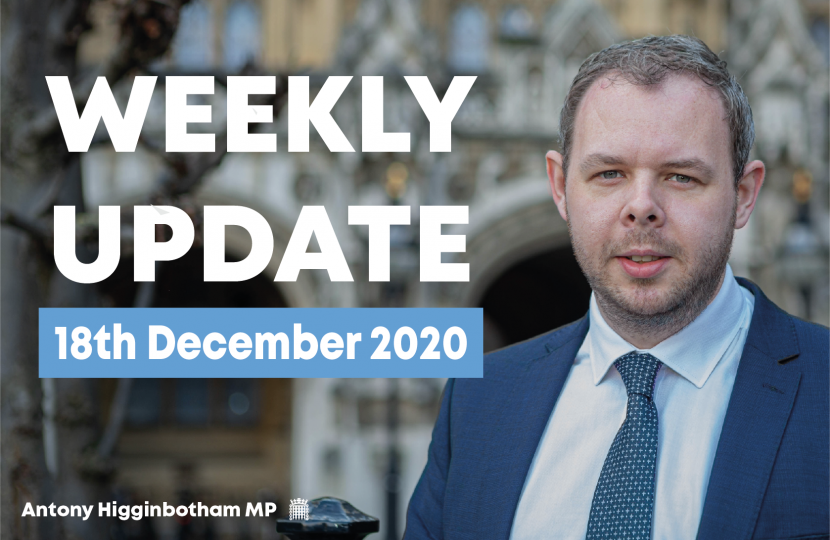 Last Saturday marked 12 months since the 2019 General Election, when I had the enormous honour of being elected as your Member of Parliament.

I can still remember the campaign and the nail-biting count like it was yesterday. When the polls closed at 10pm the exit poll came out and showed Boris Johnson and the Conservatives were on course for a large majority, but Burnley was too close to call. For hours after that, Council staff worked around the clock until the result was finally declared.

The year since then has been unlike any other. It has required enormous sacrifice from all of us and a national effort not seen in peacetime before.

I have also worked tirelessly to ensure that Burnley and Padiham finally has the representation it deserves. Those who follow me on social media, or visit my website, will see that at every opportunity I stand up and ensure those on Government benches hear about our successes, and our challenges. That’s what being a constituency MP means – bringing focus and investment. And we’ve been successful too. Millions of pounds of Government funding directed at Burnley to get shovel ready schemes like Pioneer Place off the ground, and Padiham’s much needed flood defences now on track to be delivered thanks to more than £2m of additional funds.

I was elected on a clear focus to do things differently. Part of that was being more accessible as your MP both online and offline, and part of it was being the radical change that we need. Delivering on the shared priorities that we all had in December, and continue to have today.

Delivering Brexit is undoubtedly the biggest of those priorities and this week we are in the final stages of the negotiations. As I said last week in this column, whatever the outcome of those, our great country will thrive.

It also means delivering on the extra 20,000 Police officers – of which we already have thousands across the country, and new officers right here in Burnley and Padiham, patrolling the streets; investing in our fantastic NHS including almost £2 million for Burnley Hospital announced just last week, thousands more nurses and doctors, and the largest funding settlement ever; and introducing a new, modern, UK-designed Points Based Immigration System meaning we no longer need to have our borders controlled elsewhere but can decide here what it is that we need in terms of skills and then attract the best and the brightest from around the world.

Those who know me will also know that supporting our world-class armed forces, and the veterans who have served, is an issue I care deeply about.  I have been fortunate enough to be able to join the Armed Forces Parliamentary Scheme, giving me the opportunity to speak to soldiers and officers about the work they do in an unvarnished way; I have backed the introduction of new schemes like the Veterans Railcard so we can show our thanks as well as saying it; and I supported the Overseas Operations Bill which will finally end the cycle of vexatious claims, brought by unscrupulous solicitors firms, that has plagued some members of our armed forces.

This year has not been without challenge though, and Covid-19 has been a big focus and undoubtedly will continue to be next year. My priority has always been protecting the life and health of local residents, and ensuring we carry our businesses through so that next year we are in the best possible shape to kick-start our economy.

As I look back on the last 12 months I am in awe of the many people I’ve been able to meet. From those who are going above and beyond to support people in need, to the businesses which have adapted.

I’ve also created a short snapshot of the last 12 months, which you can watch online by visiting www.antonyhig.co.uk/news/1-year-on.

The Government has announced landmark reforms that will transform post-16 education and training. The aim is to boost skills across the country, helping people get into work and reshaping how training is delivered with a greater emphasis on skills needed by employers.