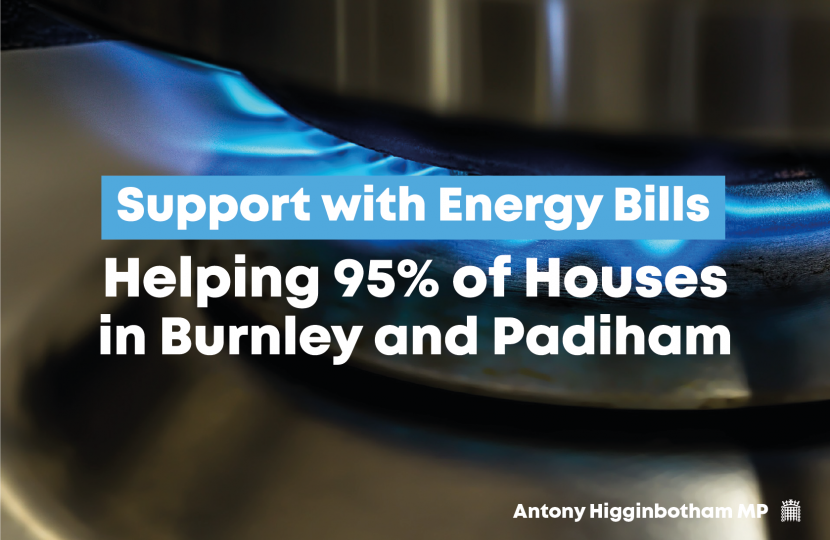 Following Ofgem’s confirmation that the energy price cap will rise by £700 from April, the Government have announced a three-part plan to help with household fuel bills immediately and protect people against half of this increase.

40,440 households across Burnley and Padiham are set to be supported by a £150 rebate this April.

£200 will also be deducted from the energy bills of all households in what is described as a ‘smoothing’rebate to be paid back over the next five years at £40 per year – starting from April 2023.

In addition local councils will have access to a discretionary fund of £144 million to support those households not eligible for the council tax rebate.

In total the plans are worth up to £350 per household across the borough, as part of the £9.1 billion package of government support to help with rising energy bills.

Commenting the local MP Antony Higginbotham, who has welcomed this support said:

Global pressures have led to residents across Burnley and Padiham feeling a squeeze on their household costs, so it is right that the Government have come forward with this support. It’s something I’ve certainly been raising with them.

£350 will be provided to over 95% of households in Burnley and Padiham. That’s broken down into a £150 rebate, taken off everybody’s Council tax bill in bands A-D, which will happen in April. And then a £200 reduction in what would have been an increase, to be taken off everybody’s bills by the energy suppliers which will then be repaid over the next 4 years at £40 per year. The full details are being worked out but ministers have also assured me that only those who benefit will repay, and so those who don’t currently pay an energy bill won’t be expected to repay something they never used.

Without this action, many residents would have seen their bills rise in April by almost £700 a year. This will help to limit this and spread the huge increase in the global cost of gas over a longer period.

Plus it’s on top of pre-existing measures to support families, such as the Warm Home Discount scheme.

As the UK economy continues its recovery from the pandemic, the government are confronting the global inflationary pressures caused by the world economy coming swiftly back to life.

Although, there are limited levers the government has to deal with these global problems – the steps have already been taken to support families. These measures include reducing the Universal Credit taper rate, increasing the National Living Wage, freezing fuel duty for the twelfth year in a row, and launching a £500 million Household Support Fund to help the lowest-income households with their bills.

Measures also include continuing with plans to increase the Warm Homes Discount and extend eligibility by one-third to 3 million vulnerable households, worth £150.

Right now, I know the number one issue on people’s minds is the rising cost of living.

That’s why the Government is stepping in with direct support that will help around 28 million households with their rising energy costs over the next year.

We stood behind British people and businesses throughout the pandemic and it’s right we continue to do that as our economy recovers in the months ahead.

Help with the Cost of Living - Antony Higginbotham MP

I want to help with the cost of living as much as I can and so have pulled together the following information for those who need pointing in the right direction in regards to welfare support, household bills, travel costs or childcare.