Antony calls for community to come together to tackle inequality 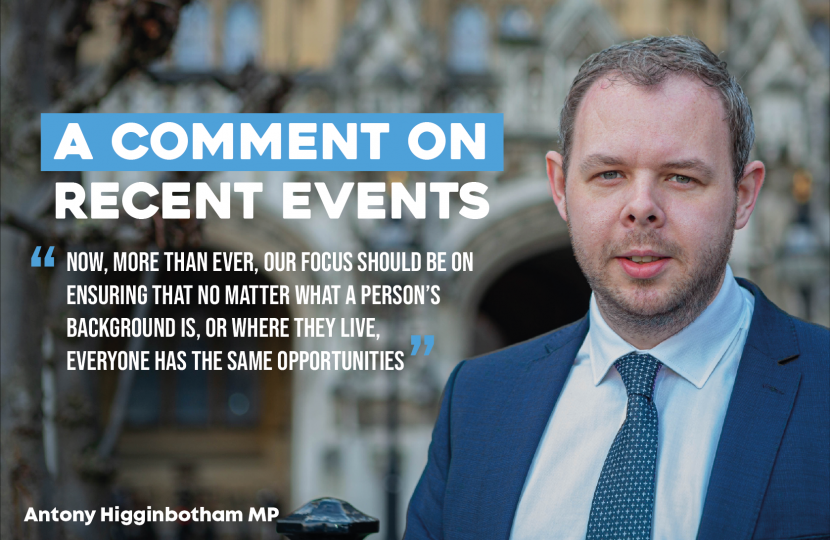 A few weeks ago, protests descended on London because a community is hurting, angry at the injustice they experience and wanting change.

Sadly, we then saw as a small group used that protest as a cover, engaging in violent attacks and vandalism whilst calling for the abolition of capitalism and the de-funding of the police.

This week we saw a different minority emerge, who looked to use the same movement as cover for their own end.

The discord spread by both of these small minorities is wrong and the people involved should be ashamed of the divisiveness they seek to instil across communities.

We have a strong record in this country of tackling discrimination and prejudice, whether it be because of race, religion, gender, sexual orientation or any other characteristic.

But there is work to do. We cannot accept that you’re more likely to be unemployed if you’re from a black or Asian background, or that your educational attainment will be lower if you’re a white working-class boy.

Those inequalities cannot be tackled alone though, and we must stand firmly against those mentioned above who want to divide our communities. If those behind the soundbites were trying to unite people only around the name, there would be no contention and no condemnation.

That is not what is happening though. The banner was not about the statement but about shutting down the grievance of one community.

Politics should be about equality of opportunity, not identity. Finding solutions to our collective problems. If we allow ourselves to fall into a culture war, led by statues and TV shows, we will achieve nothing.

Now, more than ever, our focus should be on ensuring that no matter what a person’s background is, or where they live, everyone has the same opportunities. That is the politics I stand for and what I will continue to fight for.

Padiham Flood Defences and an update on Vaccinations

At the beginning of this week the Met Office issued an Amber alert across much of the country, with heavy rainfall expected, including in Burnley and Padiham. Storm Christoph, as it has been named, is also bringing with it the potential for flooding.