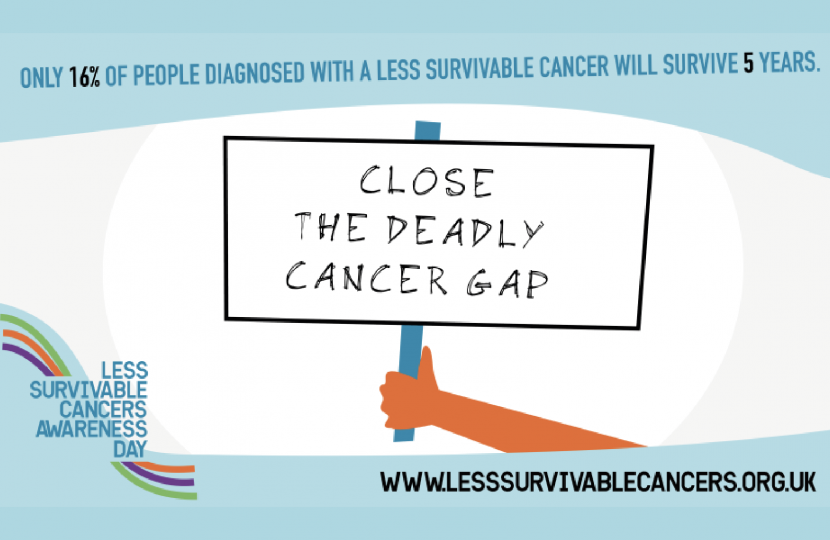 The Member of Parliament for Burnley and Padiham Antony Higginbotham is backing the first Less Survivable Cancers Awareness Day to highlight the critical importance of early diagnosis in improving survival and quality of life for people diagnosed with these cancers.

Less survivable cancers are difficult to diagnose. Screening programmes are limited or non-existent and most of the general public are unaware of common symptoms. Data released by the LSCT in 2021 showed that awareness of the symptoms of the deadliest cancers is as low as 4% in the UK.

Many patients with a less survivable cancer will only be diagnosed after an emergency admission to hospital or an emergency GP referral after symptoms have become severe for other common cancers, the proportion diagnosed at such a late stage is far lower and the average five-year survival rate is markedly higher at 69%.

Data released by the NHS last year showed that the proportion of less survivable cancers diagnosed in England in emergency settings like A&E departments and resulting in first hospital admissions was far higher than for more survivable cancers. While 2.7% of breast and 7.8% of prostate cancer cases were diagnosed as an emergency, the figures were 53% for pancreatic, 52.7% for Central Nervous System (including brain), 44.9% for liver, 35.3% for lung, 30.2% for stomach and 20.5% for oesophageal cancers.

These late diagnoses account, in part, for the catastrophic prognoses for thousands of people each year as patients with cancers that are diagnosed in an emergency suffer significantly worse outcomes.

As well as a focus on symptom awareness, the LSCT is calling for all UK governments to commit to increasing survival rates for less survivable cancers to 28% by 2029 by eliminating avoidable delays in diagnosis and proactively investing in research and treatment options.

Whilst cancer services have been significantly disrupted by Covid-19, treatments have continued throughout Burnley and Padiham. But it’s highlighted the importance of early diagnosis.

We know that early diagnosis is crucial and now is the time to work together and make a real difference in life chances for those people across Burnley and Padiham who are diagnosed with these cancers each year.

We are delighted Antony is supporting the first Less Survivable Cancers Awareness Day.

We know that delays in diagnosis lead to much poorer outcomes for patients with these rapidly advancing cancers. We also know the trauma associated with receiving a diagnosis in an emergency setting for both patients and families.

These cancers are currently difficult or impossible to treat at later stages and the time from diagnosis to death is often brutally short compared to more survivable cancers. The situation is critical and has been exacerbated by the Covid-19 pandemic.

The Taskforce is calling for a significant increase in research funding as well as a commitment to increasing resources for early diagnosis for less survivable cancers and I’d like to thank Antony Higginbotham MP for supporting our calls and helping us to close the deadly cancer gap.

The Less Survivable Cancers Taskforce is urging everyone to be aware of the symptoms of these deadly cancers and to seek medical help at the earliest opportunity if they recognise any of the signs.

Typical symptoms will vary but red flags for less survivable cancers could include any of the following; indigestion, abdominal pain, unexplained weight loss, a loss of appetite, difficulty swallowing, a persistent cough, unexplained tiredness, headaches or nausea. The key message is to seek medical help swiftly if you notice anything is unusual for you.