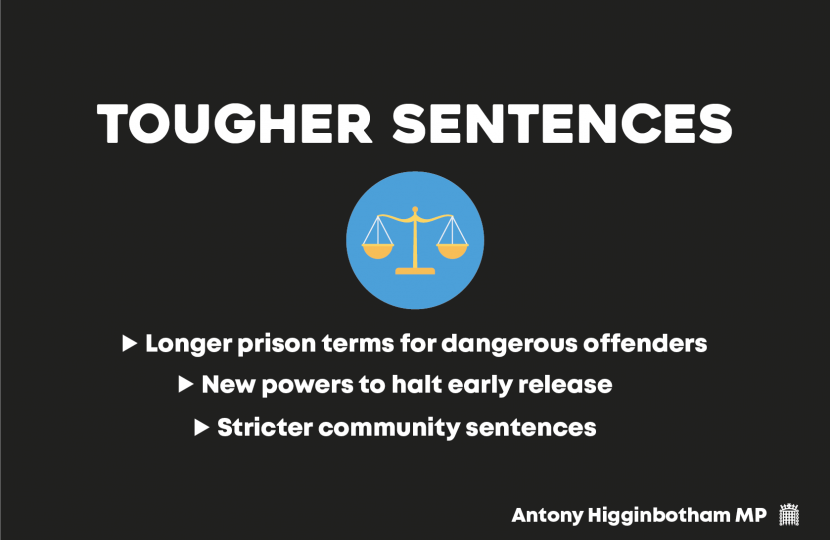 Local MP Antony Higginbotham has welcomed the Government’s announcement today that changes to sentencing in England and Wales are to be introduced, resulting in longer prison terms for dangerous offenders.

Under the new proposals the Government is to radically overhaul sentencing in a plan to crack down on crime and ensure that dangerous criminals are kept in prison for longer.

The most serious criminals, including murders, who are jailed for life will no longer be released halfway through their sentence with proposals for those who receive life sentences serving a minimum two-thirds of their term in jail before they are even considered for parole. Anyone sentenced to more than four years for serious crimes such as rape, manslaughter and GBH will also have to serve at least two-thirds of their sentence rather than becoming eligible for release at the halfway point.

For other crimes the White Paper also proposes stricter community sentences, with greater use of GPS tags, diversion of addicts into treatment programmes, and a doubling in curfew restrictions to two years for more serious criminals released into the community.

The proposed longer sentences will, however, be balanced by new laws to help ex-offenders find jobs after prison by wiping lower level offences from their slates, but only if they remain crime-free for seven years.

People in Burnley and Padiham rightly expect our streets to be safe and violent criminals to be locked up, because the first priority of any government is protecting the public.

With record numbers of people applying to join the Police, and us well on the way to recruiting the extra 20,000 I promised, we are making good progress on one part of the jigsaw but it’s vital we also get sentencing right.

For too long prison terms haven’t been the deterrent they should be, and these proposed tougher sentences change that. They will mean that the most serious violent and sexual offenders get the prison time they deserve, with new community interventions to tackle those who cause misery on the streets.

But I also know, from my own time mentoring young people who entered the criminal justice system, that rehabilitation is possible. So welcome the employment support for those who are committed to a life free from crime.

For too long the public have been failed by a system that lets out dangerous criminals too early while trapping others in a life of low-level crime.

This Government is putting an end to that – with smarter sentencing protecting the public as part of a justice system they can finally have confidence in.

We have seen far too many cases recently of criminals being let out early and then offending again and the judges being unable to impose the stiffer sentences that they want and that society wants because of the restrictive guidelines that they face…there's no point in catching these criminals if they are simply going to be let out early.