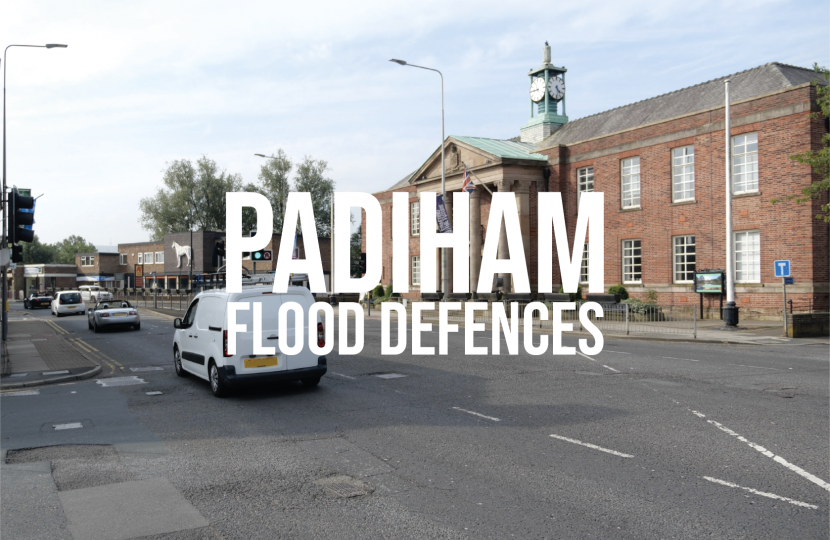 Communities across Padiham which were affected by flooding during the winter months will be better protected and more resilient in the future, after new funding was announced by the Government.

The news comes on the same day the Government also published a long-term plan to tackle the risks of flooding and coastal erosion for the future. Its long-term flooding strategy - the most comprehensive package of measures in a decade - includes investment of £5.2 billion to create around 2,000 new flood and coastal defences that will better protect 336,000 properties in England by 2027, alongside support to help households and businesses get back on their feet more quickly after flooding.

Up to £170m of this has been brought forward to accelerate work on ‘shovel-ready’ flood defence schemes to begin construction in 2020 or 2021. Padiham is one of the beneficiaries, with improvements set to be made to the flood defence scheme, providing an immediate boost to jobs supporting the local economy. This is part of a wider £5 billion package of accelerated capital investment announced last week by the Prime Minister in a speech setting out his economic strategy to support jobs and get Britain building, with overall investment in the nation’s future prosperity set to exceed £600 billion over the next five years.

In total, the Government’s flooding strategy will see the delivery of flood and coastal defences by 2027 that will prevent £32bn in economic damage, as well as creating areas to store water during flooding and greater use of nature-based solutions to reduce flood risk. It also sets out proposed changes to the joint government and insurance industry Flood Re scheme to lower premiums on properties that invest in flood resilience measures and allow claims to include an additional amount so that flood resilience measures are included in repairs.

“This is something I have lobbied the Government on extensively since I was elected in December and securing the extra funding is great news for Padiham and Burnley which will benefit enormously from improved flood defences once the scheme Is completed. It will protect over 300 businesses, 2,000 jobs in those business and over £30m of economic benefits as a result.

“As we come through the Coronavirus pandemic we need to accelerate our investment in infrastructure to level-up, as I committed to doing, and so I very much welcome the Government’s commitment to this. The £5 billion to bring forward infrastructure projects of all types announced by the Prime Minister, from flood defences to schools and roads, will help create new jobs and opportunities across the UK, and I will continue to fight to ensure our area gets its fair share.”

“Last winter I saw for myself the misery and upheaval that flooding can bring to lives and livelihoods and I said we would do more to help people.

“This long-term plan will help push back the mighty flood waters and protect hundreds of thousands of homes, businesses and livelihoods.

“Our record investment will also stimulate economic growth across the UK as we build back better.”

“The devastating impacts of last winter’s flooding were an important reminder of the need to continue to invest and accelerate action to reduce the impact of flooding on our communities.

“Our record investment and ambitious policies will better protect homes, schools, hospitals and businesses, but we also recognise that we cannot prevent flooding entirely, which is why we will ensure that communities at high risk are more resilient.

“Working closely with the Environment Agency, local authorities, business and the third sector we will create a better protected and prepared nation.”

Local MP Antony Higginbotham is backing the £5 million ‘Escape the Everyday’ campaign that highlights the quality destinations, visitor attractions and experiences on offer in Burnley and across the UK.