Antony welcomes over £150 million to slash carbon emissions from industry, schools and hospitals in the North West 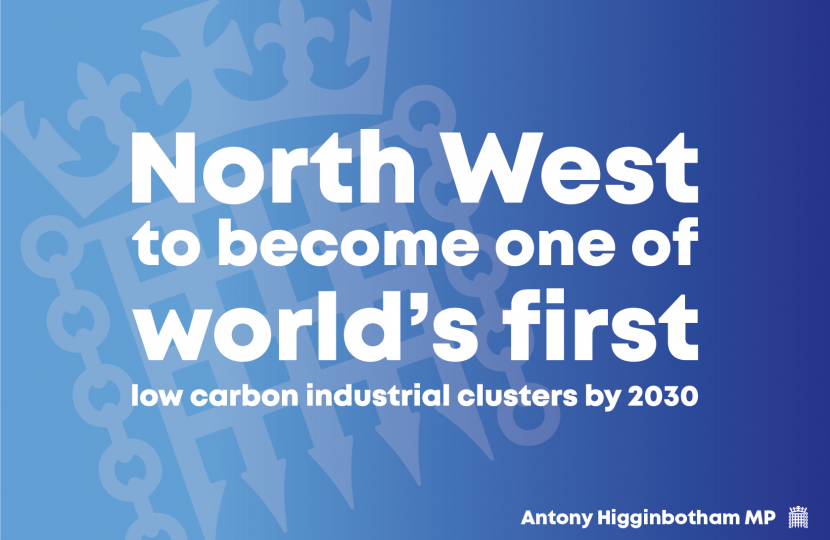 The North West of England is set to benefit from over £150 million Government investment as part of an ambitious blueprint to deliver the world’s first low-carbon industrial sector and to cut emissions from public buildings like schools and hospitals.

The funding comes as part of a package of national measures announced by the Business and Energy Secretary that will create and support approximately 80,000 UK jobs over the next 30 years.

The national pot comprises £171 million which has been allocated to nine green tech projects across the UK to cut emissions from industry, and £932 million to decarbonise heat and improve the energy efficiency of public buildings across the country.

Making sure public buildings such as schools and hospitals are as energy efficient as possible is the right approach to tackling climate change.

*And investing in a low carbon industry such as onshore and offshore hydrogen projects will not only help in us achieving net zero by 2050 but will bring opportunities for high skill, high paid jobs across the North West, including here in Burnley and Padiham.

While reaching our climate targets will require extensive change across our economy, we must do so in a way that protects local jobs, creates new industries and attracts inward investment - without pushing emissions and business abroad.

Today’s strategy builds on this winning formula as we transition low carbon and renewable energy sources, while supporting the competitiveness of Britain’s industrial base.

This funding will support the North West to become a low carbon industrial cluster, creating up to 10,000 new green jobs and capturing huge quantities of emissions.

Meanwhile, our £123 million helping hand to schools, hospitals and other public buildings in the North West will help future-proof the buildings, helping reduce their carbon footprint as we build back greener from the pandemic.

Of the £171 million for green tech projects, £33 million will go to Hynet, a hydrogen energy and Carbon Capture, Usage and Storage project in the North West which aims to transform the region into a low-carbon industrial cluster by 2030.

The funding will also support the development of two onshore and offshore projects near Liverpool to build the infrastructure needed for a regional hydrogen economy locally – including producing, distributing, and storing hydrogen to help decarbonise local industry.

Taken together, the projects aim to start capturing one million tonnes of CO2 from 2025, rising to 10 million from 2030 – the equivalent of removing all emissions from Merseyside and Cumbria combined.

A further £123.6 million will be invested in 28 projects in the region to improve energy efficiency and decarbonise heating in public buildings and cut energy bills for hospitals, schools and council buildings.

The funding forms part of the Public Sector Decarbonisation Scheme, which funds measures such as low carbon heating systems and energy-efficient insulation. A total £932 million is being allocated through the scheme across the country to 429 projects.

We cannot reach net zero without decarbonising industry and HyNet North West is a game-changing project of strategic importance. Through the production of low carbon hydrogen and the capturing, and storing, of carbon dioxide, it offers a once-in-a-generation opportunity to create real change in how we produce and use our energy, not only reducing emissions but also creating and safeguarding jobs.

Taken together, the North West will benefit from £150 million investment.