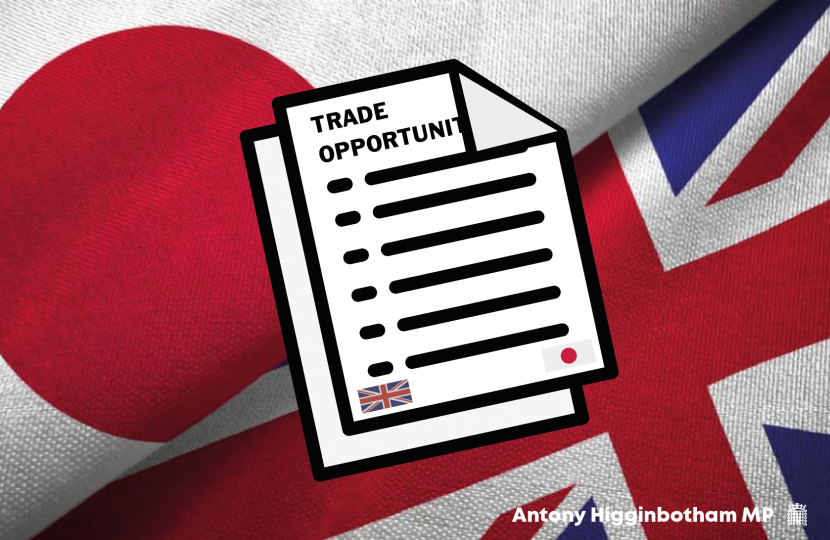 Businesses in the North West including here in Burnley and Padiham are set to benefit from the new UK-Japan Comprehensive Economic Partnership Agreement which was signed by Trade Secretary Liz Truss and Japan’s Foreign Minister Motegi Toshimitsu in Tokyo this morning (Friday 23 October).

The agreement is particularly forward-leaning in a range of areas including food and drink, securing export opportunities for the North West’s producers.

The deal could boost trade between the UK and Japan by £15.7 billion and drive economic growth, increasing UK workers’ wages by £800 million in the long run.

This deal is the first agreement that the UK has secured that goes beyond existing deals, and is tailored to the UK economy, with enhancements in areas such as digital and data, financial services, food and drink, and creative industries.

This could benefit over 700 businesses in the North West that exported to Japan last year and help even more to begin exporting their goods and services to the country.

Japan is the third largest economy in the world, behind only the USA and China, and so opening up that market to even more of our businesses is a huge step forward. With a dedicated section in the agreement for small and medium sized companies, opening up opportunities for them, there is real potential for this to be a lever for growth for businesses across Burnley and Padiham.

The speed at which it has been negotiated, going further than that which the EU had with Japan, also shows the attraction that countries have for a trade deal with the UK and is something I want to see us continue to capitalise on moving forwards.

As part of the new UK-Japan agreement, British producers of cheese, jams, sauces and chocolate can continue to freely use products such as dairy in their manufacturing when exporting to Japan.

The food and drink manufacturing sector in the North West employs 45,500 people.

UK exports to Japan have been growing by an average of 8.2% year-on-year over the previous five years. With this free trade deal in place, potential benefits include better jobs, higher wages, more choice and lower prices for all parts of the UK.

International Trade Secretary Liz Truss hailed the agreement as a landmark moment for the UK in the post-Brexit era:

Today is a landmark moment for Britain. It shows what we can do as an independent trading nation, as we secure modern and bespoke provisions in areas like tech and services that are critical to the future of our country and the reshaping of our economy.

Trade is a powerful way to deliver the things people really care about. At its heart, this deal is about creating opportunity and prosperity for all parts of our United Kingdom and driving the economic growth we need to overcome the challenges of coronavirus.

The agreement also has a much wider strategic significance. It opens a clear pathway to membership of the Trans-Pacific Partnership – which will open new opportunities for British business and boost our economic security – and strengthens ties with a like-minded democracy, key ally and major investor in Britain.

Today’s signing of the agreement also signals Japan’s strong commitment to supporting the UK’s accession to the Comprehensive and Progressive Agreement for Trans-Pacific Partnership (CPTPP), one of the world’s biggest free trade areas, covering 13% of the global economy in 2018 and more than £110bn of trade in 2019.

Head of the North West region at the Department for International Trade, Paul Stowers, said:

The trading relationship between the North West and Japan is already strong and this new partnership between our two countries is reason for optimism about the years ahead.

Exporting and inward investment will both be key pillars of the North West’s economic recovery from the Coronavirus pandemic, and the Department for International Trade is working around the clock to open up new opportunities for UK businesses large and small.

The UK stands firm in trade negotiations to ensure any future trade deals protect our NHS and maintain all existing protections for our high standards of food safety and animal welfare.

Once signed, the final agreement text will then be laid in Parliament for 21 sitting days for scrutiny under the Constitutional Reform and Governance (CRaG) Act.

A full parliamentary report will also be published on the agreement, providing an explanation of the CEPA, including any significant differences or enhancements between the UK-Japan CEPA and the EU-Japan Agreement.

Burnley and Padiham placed in Tier 3

Today's announcement (26th Nov) from the Health Secretary confirmed that Burnley and Padiham would be placed into Tier 3 as we exit the national lockdown on Wednesday 2nd December.