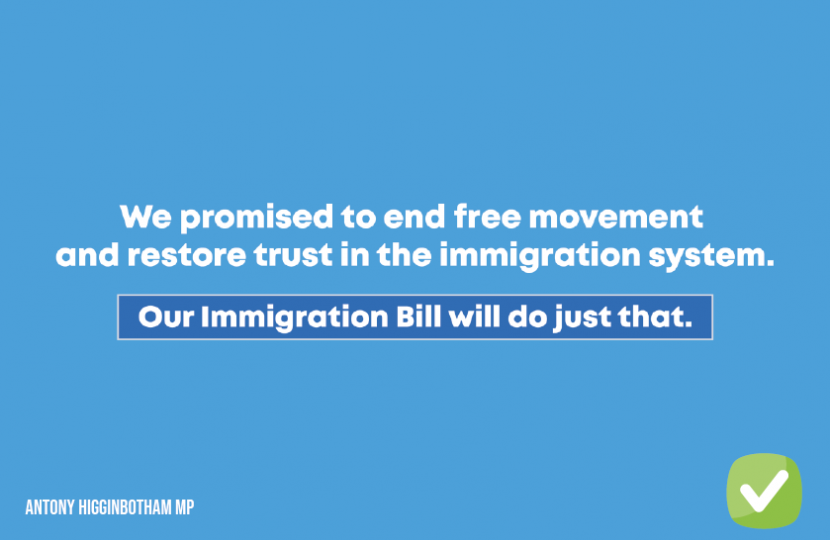 The government’s immigration bill was voted through the House of Commons on Monday night paving the way for a new system for those coming to work and live in the UK from December 2020.

With a clear majority, the Bill passed its Second Reading easily by 351 votes to 252, a majority of 99, and will now go on to further parliamentary scrutiny.

The legislation means that both EU and non-EU citizens will be treated equally, with the number one priority being the skills needed and not the country of origin. It also protects the rights of Irish citizens coming to the UK through the Common Travel Area.

In addition, the Bill allows the UK to prepare for the introduction of a new Points-Based System from January 2020.

Commenting on the vote Burnley MP Antony Higginbotham said “On Monday I voted to progress the new Immigration Bill - making sure that as we leave the EU we end free movement and bring in a new fairer immigration system that works for the UK. This is another area where we said we would take back control and that's what we are doing”.

The plan for a new points-based system will need to be separately approved by Parliament.

“The pandemic has shown us how important it can be to attract the best and brightest to our country. Talented doctors, nurses and paramedics from all over the world are currently playing a leading role in the NHS’s efforts to fight coronavirus and save lives. Alongside our new immigration system, we will introduce a new fast-track NHS visa to ensure the NHS can continue to access highly skilled medical professionals from across the world” said the Home Secretary Priti Patel.

The Immigration Bill is now being considered by a Public Bill Committee which will scrutinise the Bill line by line and is expected to report on it by Thursday 25 June 2020.

Victims of domestic abuse will now be able to access support from local pharmacies in Burnley and Padiham, as part of the Ask for ANI scheme backed by local MP Antony Higginbotham and the Government.