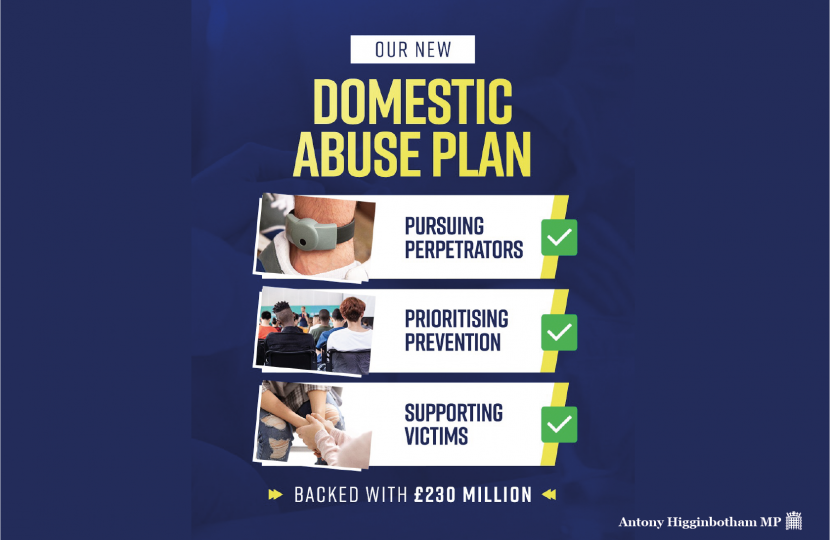 Further measures to tackle domestic abuse, building on the measures brought in over the last 2 years to strengthen protections for victims, have been announced by the Home Secretary with the backing of Conservative MPs.

The Tackling Domestic Abuse Plan which was unveiled today (Wednesday 30th), aims to tackle perpetrators, prevent domestic abuse from happening in the first place and help all victims and survivors.

Local MP Antony Higginbotham who has spoken about the scourge of domestic abuse numerous times in Parliament reacted positivity to the news, commenting:

This further step forward is about bringing perpetrators to account, putting extra measures in place to prevent domestic abuse happening in the first place, and supporting those who suffer through extra funding for the National Domestic Abuse Line.

I very much support the tough approach we’re taking to tackle this heinous crime, and greatly welcome the expansion of the Ask ANI scheme. But there’s more to be done and I don’t want to see anybody suffering in silence.

If anybody reading this needs help, please reach out to me, your councillor, the local pharmacist or a friend. I'll do everything I can do to assist because no one should suffer in silence.

As part of the measures, the government is getting tough on offenders by introducing a new register for domestic abusers and electronically tagging the 3,500 people who pose a significant risk to women and girls.

School children will be taught the importance of healthy relationships as a way of early intervention.

And funding to support victims through the National Domestic Abuse Line is to be doubled, with the Ask for ANI codeword scheme to also expanded to Jobcentres across the country.

The government launched the Ask for ANI (Action Needed Immediately) codeword scheme last year to enable victims of domestic abuse to discreetly signal they need help and gain immediate help from the police, or other support services within local pharmacies.

A total of 700 Independent Domestic Violence and Sexual Violence Advocate roles will also be funded, with additional cash being given for 300 roles – which will refer and support victims and survivors – later this year.

Domestic abuse is a devastating crime that ruins lives and tackling it is an important part of this Government’s Beating Crime Plan. For far too long the focus has been on what the victim might have done differently, rather than on the behaviour of the perpetrators themselves.

This must now change. My Domestic Abuse Plan focuses on taking the onus off victims and making it easier for them to access the help and support they need, while taking tough action against perpetrators.

The NSPCC has long highlighted that children experience domestic abuse and can also be victims. In 2020 the Government amended its landmark Domestic Abuse Act to recognise this.

We welcome the publication of the Domestic Abuse Plan, but believe this needs to go further in supporting the complex needs of child victims.

It is essential that a proportion of the funding set aside for community-based services and support for young victims is used to train specialist practitioners to work with children. Domestic abuse can have a devastating impact on children and derail their lives, but with access to support services in the community they can recover.