Dramatic Drop in Unemployment in Burnley and Padiham 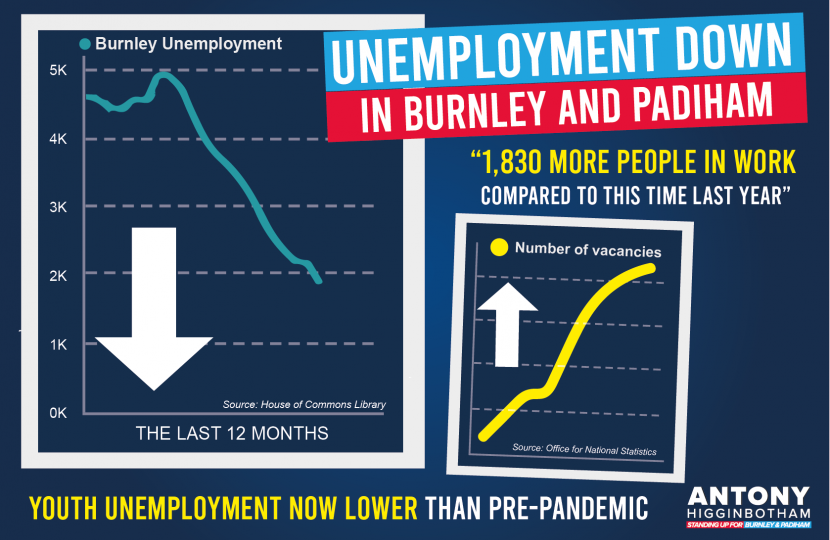 Figures released today by the Office for National Statistic and the independent House of Commons Library show a dramatic drop in Burnley’s unemployment figures.

As of this month 1,830 fewer people were out of work in Burnley & Padiham when compared to this time last year. This represents a 37.9% fall in those looking for work as more people gain employment within the borough.

The latest figures are being highlighted by the Chancellor of the Exchequer Rishi Sunak MP as evidence that the Government's flagship Plan for Jobs is working, with schemes like Kickstart and Restart helping more people into employment.

Historically we know that Burnley has had higher unemployment than elsewhere in the country but this is something I’ve been determined to see us reverse because having a job, and gaining skills, can transform lives and life chances.

Through the Plan for Jobs there are now more tools available to JobCentre staff to help give those who need it the skills and confidence to get into employment. And we're seeing the results. We have more young people in work than before the pandemic, and those at risk of long-term unemployment are being given tailored support on a one-to-one basis which is making a huge difference.

With job vacancies in the borough also on the up, in everything from manufacturing and logistics to healthcare and hospitality, I'd encourage all employers and job seekers to speak to the local JobCentre team so we can keep our borough powering forward.

Over the past 12 months local unemployment has been falling month on month as more people secure employment within the borough. Unemployment for young people has also fallen dramatically with fewer young people out of work compared to pre-pandemic levels.

Nationally the unemployment rate has now fallen to 3.7%, its lowest level for almost 50 years, whilst for the first time since records began there are fewer unemployed people than job vacancies.