European Super League has 'no regard for clubs like Burnley FC and football fans across the UK', says town's MP 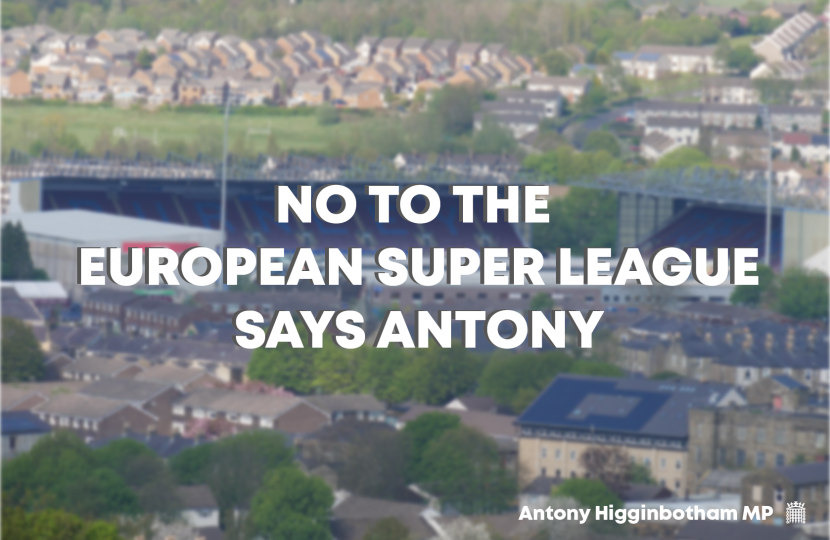 Local MP Antony Higginbotham put his objections on record when he slammed the proposals to create a new European Super League in the House of Commons this week. Speaking in a Ministerial Statement he told the Culture Secretary that:

“In forming these proposals, the six premier league clubs involved have shown no regard for the impact on clubs such as Burnley, but also no regard for the fans who offer their unwavering loyalty season after season”.

The new European Super League is a proposal which is seen by many as anti-competitive, locking out many clubs from the proposed competition, with the 15 founding clubs being guaranteed participation every year. Both UEFA, the Premier League and FIFA are threatening action if the league was to go ahead.

So far these proposals have faced condemnation from football’s governing bodies, English clubs, ex-players, managers and even the Prime Minister, who has vowed that “no action is off the table and the Government is exploring every possibility, including legislative options, to ensure these proposals are stopped”.

Antony Higginbotham MP joined the calls by asking “that the Government do everything possible to protect top-flight football in this country”, saying that it “provides so many economic benefits to communities, including in Burnley and Padiham”

Speaking after the statement he said:

“This was a poorly thought out proposal from a small number of clubs who have no regard for the game and I was pleased to hear the government confirm no options are off the table. Football does not belong to the owners of those clubs and we must do whatever it takes to give fans a proper voice, and protect the game at every level, from grassroots to the elite”