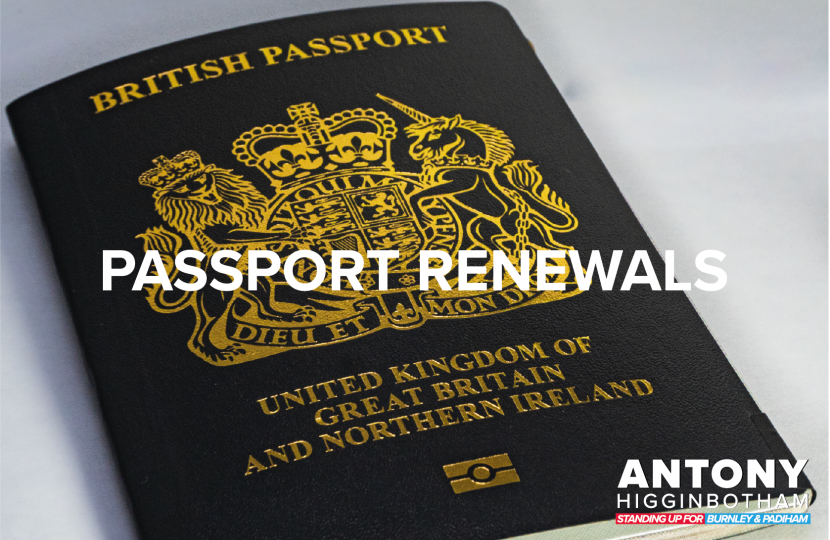 With some residents experiencing delays with passport applications local MP Antony Higginbotham has raised the issue in Parliament as the Home Office confirm an extra 700 staff are to be recruited to meet the timeframe of 10 weeks.

Speaking in the House of Commons Antony Higginbotham said:

In the last few weeks there has not been a day go by where me and my team haven’t helped a constituent with a passport issue. And whilst most of those have been resolved it shouldn’t take the intervention of someone’s Member of Parliament to get their passport.

Official figures show that following intervention from Ministers, and a significant uplift in resources, 98.5% of those applying are now receiving their passport within the 10 week period. But with more than 5 million people delaying applications for passports during COVID-19 there is in an unprecedented demand as holidaymakers seek to renew passports in time for the summer holidays.

The advice to all those who are looking to renew their passports, or apply for the first time is, however, to continue applying early and as far in advance of any travel plans as possible.

People who need a new passport are being urged to apply for one as soon as possible to ensure their passport arrives in time for the peak summer season.

Where somebody has waited longer than 10 weeks and is in urgent need, with the date of departure fast approaching, I’d encourage them to get in touch, and I’ll do what I can to assist.

So far, my team and I have managed to help around 30 families get their passport, in some cases at the very last minute. And we’re still working to resolve another dozen.

Customers can also help to ensure there are no delays with their applications by using a high quality photo with a digital code, applying online rather than on paper, and using the Post Office check service if paper forms must be used.