I'm backing Penny Mordaunt to become our next Prime Minister. 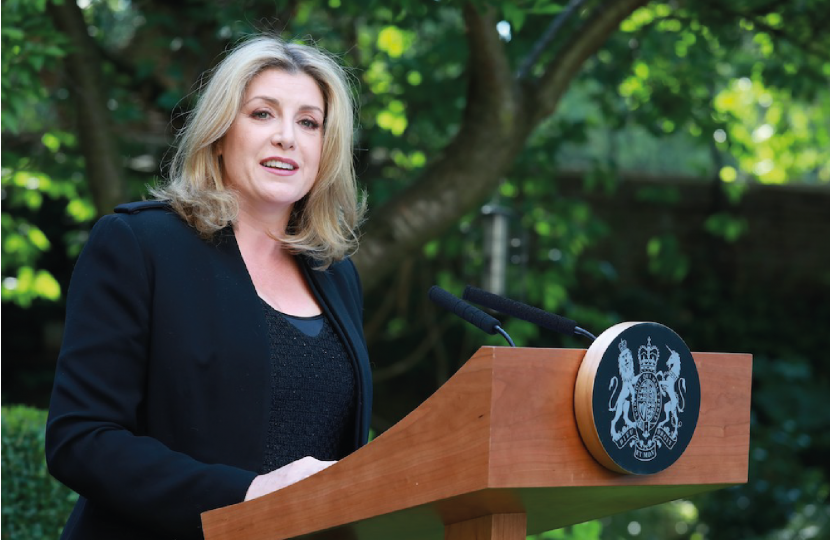 Last week Boris Johnson announced that he would be resigning as Prime Minister and a new Leader of the Conservative Party, and the country, would be in place by the 5th September.

This followed a bruising period for all of us. It was also last week that I came to the difficult decision that I could no longer see a way for us to resolve the issues that have plagued us for months. And so, I joined with colleagues in asking for a change.

There are some who will say I took too long in coming to that decision. And others who will say I shouldn’t have acted at all. But I never wanted to see the end of Boris’ premiership at this early stage. He is the Prime Minister who achieved so much – locally, nationally, and internationally.

Despite the difficult circumstances of last week, he goes with my respect, admiration, and gratitude for all he has done for us. From finally taking us out of the EU, to steering us through COVID-19.

And we have also seen the outpouring of emotion and thanks from the Ukrainian people for the personal friendship that has grown between Boris and President Zelensky. This friendship, and our support, must continue under any new leader. Putin must continue to pay a heavy price.

But with the dust settling on last week we are now looking ahead. The leadership contenders are putting forward their respective pitches for how they would govern our great country. I am grateful to all those residents who have completed my Leadership Survey and would encourage anyone who hasn’t taken part to do so (https://bit.ly/3z52y7M).

Over the last week I have met with each candidate who put themselves forward. In doing so I have been clear that I believe we need a leader who has the commitment to continue to level up opportunity; the plan to grow the economy and help families and residents with the cost of living; the courage to stand up to Putin; the vision to seize even more Brexit opportunities; and the integrity to lead our country.

And so whilst we have a field made up of many strong candidates, for me the answer is clear. Penny Mordaunt is not only a staunch Brexiteer who has spent the last year negotiating trade deals with states across the USA, but she is also the one who ticks every box in spades. It is for that reason that I am backing her campaign to become our next Prime Minister.