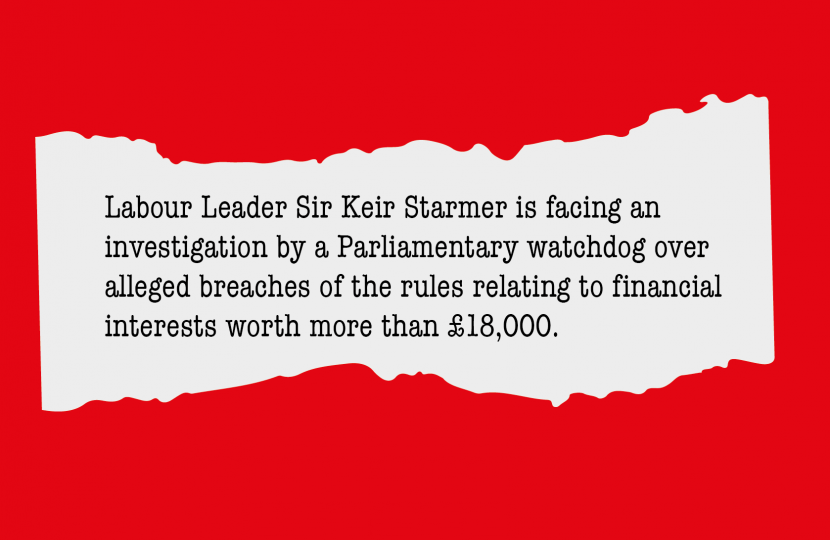 Labour Leader Sir Keir Starmer is facing an investigation by a Parliamentary watchdog over alleged breaches of the rules relating to financial interests worth more than £18,000.

The inquiry, which was opened last week, centres on claims about the late declaration of earnings, gifts and benefits from UK sources. They are understood to relate to hospitality, including football tickets, and book payments provided to the Labour Leader.

It comes after Durham Police announced only last month that both Sir Keir Starmer and deputy leader Angela Rayner are both under police investigation for potential breaches of lockdown rules.

Sir Keir, who was pictured through a window holding a beer bottle, has said he will resign if he receives a fixed penalty notice for an event he attended on 30 April 2021 when lockdown rules were still in place.

It appears the Labour Leader has questions of his own to answer. I knew about the police investigation looking at whether or not he breached lockdown rules by attending an event with alcohol during lockdown. But this latest investigation just emphasises the complete hypocrisy from Sir Keir and his deputy.

We’ll have to see what comes from both investigations.

The latest register of MPs’ interests show several entries were added recently by Sir Keir Starmer: the book fee for one to five hours’ work a week since March 2020 received in April, and tickets for two football matches worth more than £2,000 received in March and April.