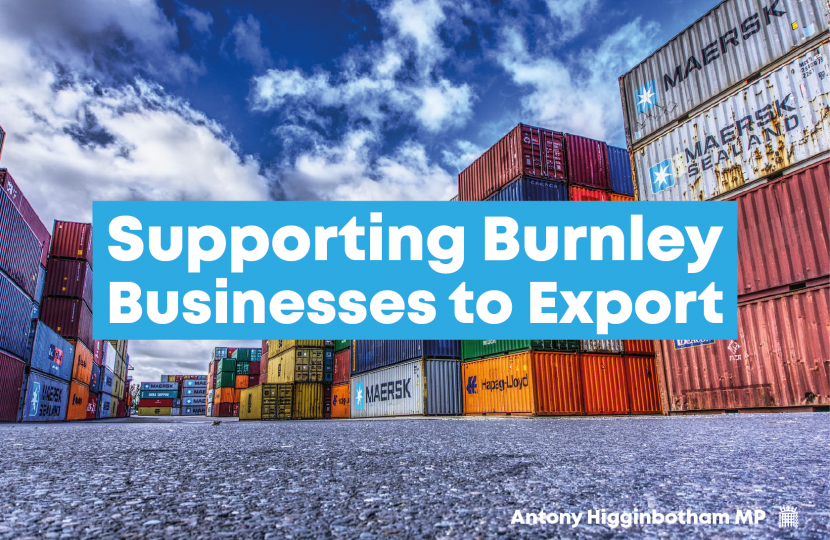 New research released estimates nearly 6.5 million jobs in the UK are supported by exports. Commissioned by the Department for International Trade and carried out by the University of Strathclyde, it lifts the lid on the value of exporting-led jobs to the UK economy and helps inform the discussion around the untapped exporting potential of businesses across the country.

I want to see Burnley’s economy thriving and a big part of that is getting our local businesses exporting. It will generate new economic growth, and the jobs that go with that. And as we exit this difficult period and seek to repair the damage that Coronavirus has done it is more important than ever.

I'd encourage any local business that is interested in exporting, but doesn't know how, to get in touch with me and I'll do all I can to help. Because linking ourselves with the fastest growing economies around the world means better paid jobs, more productivity and faster growth for our companies here in Burnley.

This ground-breaking research estimates that median wages in jobs directly and indirectly supported by exports were around 7% higher than the national median and that more jobs (3.7 million) are supported by exports to the rest of the world than to the EU (2.8 million). The Office for National Statistics also estimates that goods exporting businesses are 21% more productive than those who do not.

It provides a clear rationale for pursuing an exports-led recovery from Covid and using trade liberalisation to boost strategic industries – such as services, tech and renewables – that are key to building back better from the pandemic.

An additional paper released also shows the number of jobs supported by nationally export intensive industries, broken down by constituency. This does not show how many jobs at the local level are export intensive, because local activity can vary significantly from the national average. But the information can act as a starter for a conversation until more granular estimates becomes available. It shows that in Burnley there were some 8,885 jobs (22.5%% of total) in industries that were export intensive at a national level in 2019.

The research is accompanied by a new Board of Trade report – Global Britain, Local Jobs – that prescribes a series of policy fixes to unlock the UK’s full exporting potential and propel a trade-led, jobs-led recovery from Covid-19. This includes:

The Board – which is led by International Trade Secretary Liz Truss – argues the UK’s departure from the EU is an opportunity to deepen trade liberalisation and boost the role trade plays in the economy. It argues the UK should follow the likes of Australia, Singapore and New Zealand, who have all used trade liberalisation to spur growth and capture global market share.

The report advocates deeper trade ties with faster growing nations outside Europe, with 65% of the world’s middle classes set to be in the Asia-Pacific by 2030 and nearly 90% of world growth expected to be outside the EU in the next five years.

It recommends the UK ‘ride’ the digital and green waves, highlighting the UK’s comparative advantage in those industries, with the exporting potential of the green economy set to be £170bn per year by 2030, and argues the UK should lead the charge for a more modern, fair and green WTO by working with like-minded allies on issues like industrial subsidies.

This report shows how Global Britain will deliver jobs and growth across the UK, particularly in areas like the north-west and north-east of England. Export-led jobs are more productive and higher paying, but currently too few businesses export and our economy would benefit from being more international. This potential can be liberated through more trade deals, boosting our role as global hub for digital and services trade, and by pursuing policies that drive an exports-led recovery.

“The opportunity we have as an independent trading nation is huge. Today’s report outlines how we can do things differently and capitalise on defining trends like the emergence of Asia’s middle classes and rapid growth in the Indo-Pacific.

Backing our businesses to create a thriving local economy