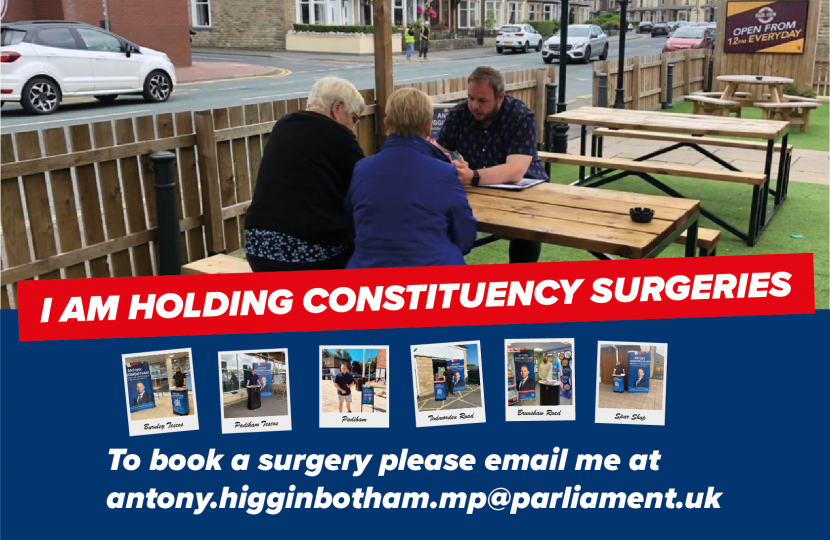 The last week has been unlike any other I’ve experienced. On Friday, like all my colleagues, I was out doing things in the constituency. The big event of the day, after visiting Safran in the morning, was the Burnley and Pendle Jobs Fair, organised by the local JobCentre and hosted by Burnley FC in the Community at the Leisure Box. Whilst there I took a call from BBC Radio Lancashire, where we spoke about Lancashire day which takes place next month, and how we can use that occasion to showcase some brilliant businesses down in Westminster.

Whilst on that call a member of my team showed me a breaking news alert. It was the news that Sir David Amess had been stabbed multiple times whilst conducting a surgery in a local church.

What followed was a heart-breaking period of watching and waiting, before the news finally reported that he had died. Sir David was one of the kindest people I met in Parliament. When I saw him, as a newly elected MP in December 2019 he had already read about the General Election in Burnley, knew me by name, and offered to help me learn the ropes however he could. That he died holding one of his surgeries – something that all of us do – trying to help his constituents makes it all the sadder.

I know the thoughts and prayers of all of us across Burnley and Padiham is with his family who are going through the darkest of times. I am also incredibly grateful to the many residents who contacted me offering their own condolences.

These tragic circumstances have, rightly and understandably, opened up questions about the nature of the events and surgeries that MPs undertake. And it also highlighted the abuse, threats, and vitriol that those in public life receive on an unrelenting basis. I rarely speak about this because it has, sadly, become part of the job. But we do need to ask searching questions about where society is going; what message we send to those who want to take on the baton of making our country a better place; and what role social media plays in all of that.

The reviews that are now taking place into security and the threats those in elected positions face will undoubtedly lead to changes.

But I have always said I want to be an open and accessible Member of Parliament. It is why I got into the job, and what I think people should expect from their representatives. It’s what drives me to hold pop-up surgeries on the weekend, and what led to the ‘Summer Surgery Tour’ I did throughout August. That saw me hold more than 30 surgeries right across the borough, with no booking, no appointment, and no set format. It was a chance for anyone who wanted to see me to come and tell me about what I could do to help; or what their views are.

For me, that is the very essence of being a Member of Parliament.

And so I want to give a clear promise and commitment. Whilst there might need to be some tweaks to the planning and work me and my team do for these open surgeries, I will be continuing with them. You will still see me outside the supermarket, in the town and village centres, and in the community and church halls.

None of us can be cowed by the mindless actions of those who seek to do us harm, and undermine the foundations of our democracy. We are stronger than that.

This Saturday, as with so many previous weeks, I will be holding a morning surgery. This time at Tesco in Padiham. It will be the first I’ve held since the tragic events of last week. I hope to see as many residents as possible.