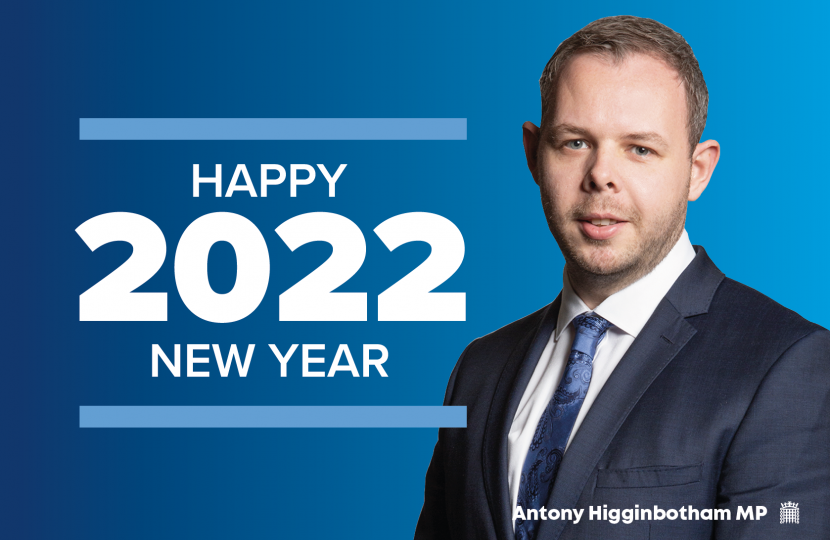 It has now been just over two years since I had the enormous honour of being elected your Member of Parliament for Burnley and Padiham, and as we leave 2021 and begin 2022 I’ve been reflecting on what’s been achieved in that period. Anyone who follows me on social media will have seen the video I posted a couple of weeks ago on this very topic and I’d encourage everyone to go and watch it.

Because despite the challenges of Covid-19 I have always been clear that nothing will knock me off course and stop me delivering on the promises I made.

Giving our borough a proper voice in Parliament was one of those promises and since being elected I have spoken in more than 140 debates and asked over 110 parliamentary questions, standing up for our area and the people and businesses in it. Now, every time I speak to Ministers at every level – including right up to the Prime Minister – they know what Burnley is about. They know how innovative we are, as well as the challenges we want sorting.

But being active in Parliament is only half of the role. For me, being accessible and visible here in Burnley, Padiham, and our villages, is even more important. That’s why I have been running my open surgeries throughout the year. From supermarkets and corner shops, to community halls and street corners, including my bumper Summer Surgery Tour in August.

As a result of all of this I have received and responded to well over 10,000 emails, letters and phone calls from residents – a challenge I couldn’t meet without my amazing team who support me every day.

This year has also marked the start of our points-based immigration system. There is work still to do, particularly around illegal immigration, but that points-based system is up and running right now. It means we have control over the skills we want to bring into the country and can do so in a way which means cheap labour isn’t undercutting people – building the economy we all want to see of high-wage and high-skill.

Policing has also been a big focus of mine during 2021. I’ve sat on the Police, Crime, Sentencing and Courts Bill Committee, ensuring that piece of legislation brings with it the right punishments for those who cause harm; I have met with our new Police and Crime Commissioner Andrew Snowden every month since he got elected so he has Burnley front of mind when setting police priorities; I have asked questions of the Home Secretary and Policing Minister about sentences and the police uplift; I’ve been out with our neighbourhood policing team, PCSOs, and emergency response team; and, I’ve worked with other Lancashire MPs to make sure we get our fair share of new police officers with hundreds more now on the beat. That to me is what delivering on a promise looks like.

Levelling-up our borough was my second biggest promise in the 2019 election, after delivering Brexit, and significant progress is being made. Political opponents like to make out like no ones knows what the term means – but I do. It’s about ensuring that we can all have pride in our borough; that this is a place people want to live, work, study and relax; and that everyone has the same opportunities here that you would have elsewhere in the country. And after decades of under-investment, or lumbering our public services with unaffordable PFI contracts, the tide has turned.

Pioneer Place is a project talked about for so long but never started, yet it is now ready for shovels to go in the ground after Government and Lancashire County Council put in millions of pounds to get it going. Our Levelling-Up Fund bid, of £20 million, was successful with the Chancellor announcing it would be fully funded in his October Budget – allowing us to transform our town centre and significantly expand the UCLAN offering. And Burnley College, one of the best FE colleges in the country, is expanding at a record rate with new facilities opening in just a few weeks. They are now supporting the Lifetime Skills Guarantee, offering Level 3 qualifications to adults without them, from January as well as now being one of the homes of the Lancashire Institute of Technology. Opportunities – expanded.

As we enter 2022 there remains much to be done to address the issues we face, and seize the opportunities being made available. And so, can I end by wishing everyone across our borough a very happy new year.