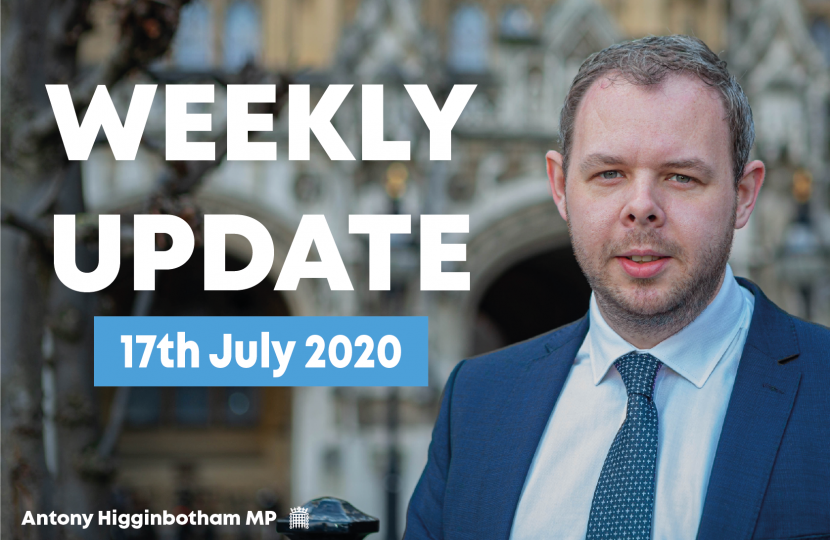 This week saw Parliament expedite legislation to bring into law the stamp duty relief announced by the Chancellor last week and I was fortunate to be able to speak in the debate on the matter. The Chancellor’s decision, to take all property sales under £500,000 out of stamp duty until March 2021, takes almost every property sale in Burnley out of the tax bracket. It will kick start our housing market – encouraging people to move again and getting out construction companies building.

And on Wednesday we had an SNP-led debate on the impact that Covid-19 was having on UK-EU negotiations, with the wording of the motion calling on the Government to extend the transitional period. But as we have come to expect from the SNP the debate was not solely about Brexit, nor was it really about the impact of Covid-19, it was just another opportunity for them to continue with their separatist agenda by calling for another referendum.

That is not a debate to shy away from though. I was able to speak in it and used the opportunity to remind the opposition parties of the commitment I made to everyone in Burnley when I was elected – that we would not extend the Brexit transitional period. We have already left the EU and on 1 January 2021 we will be out of the transition; operating as a global, independent, trading nation. There are no ifs, buts or caveats to that position. Work is continuing at pace to not only secure a mutually beneficial, comprehensive Free Trade Agreement, but also to help our businesses to adapt and prepare.

The SNPs thinly veiled attempt to argue for independence was also challenged. They so often fail to remember that they do not represent Scotland but only one point of view from within it. And the inconvenient truth remains that a referendum on independence was held and defeated. As your representative I will always stand up and defend all four corners of our Union. It is what makes our nation so special and that is the message that went out from the House of Commons on Wednesday.

Many of my colleagues also gave impassioned speeches. Highlighting our shared promise to leave the EU; the financial strength of the Union which has been so critical in tackling Coronavirus; and the need to improve education in Scotland which the SNP government is ignoring.

In turn the Scottish Nationalists made their case for independence and against Brexit. And whilst I fundamentally disagree with what they said, I respect their right to say it. They are elected to the UK Parliament and it is right that they come and make their voice heard. We got speeches from the Liberal Democrats, Plaid Cymru, the DUP and the Alliance Party. Backbench MPs making their case passionately because those issues matter – the Union, Brexit, Coronavirus. Parliament is exactly the place where people bring their views to debate them, to find common ground and to represent their constituents.

Unfortunately, however, one party was missing throughout. And that was Her Majesty’s Official Opposition. The Labour Party, whose role is to scrutinise Government on every topic, found itself without any backbenchers speaking in a debate on those core topics. Even now I cannot understand how on those issues they found themselves without anything to say. And when it came to a vote – a vote on whether to ask the Government to request an extension – they stayed silent. Instead of listening to the debate, and to the electorate who gave a clear instruction, they decided to abstain on the vote. It would appear that some lessons are never learned.