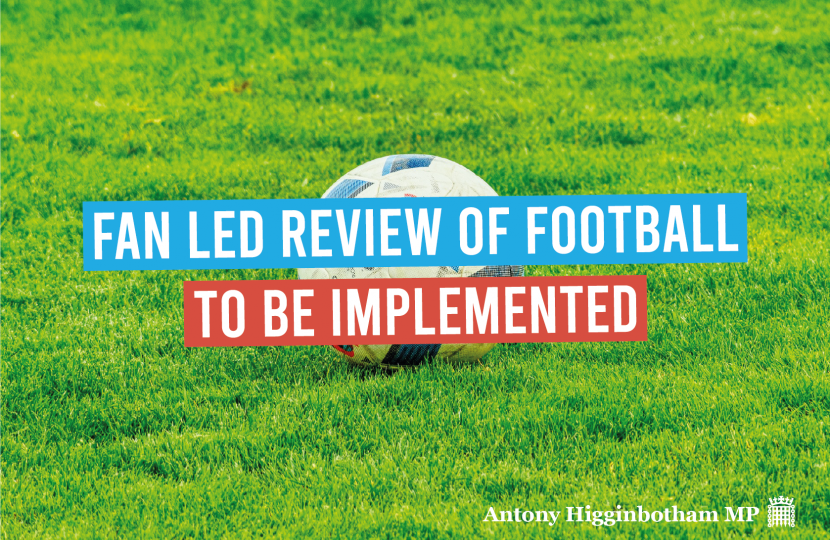 A new independent football regulator is to be set up following a government backed review conducted by former sports minister Tracey Crouch.

It follows a promise to look at the way English Football is conducted after several high-profile crises in the sport, such as the failed European Super League and the collapse of Bury FC.

Welcoming this latest announcement, Antony Higginbotham MP, who has previously spoken in Parliament about how “we must do whatever it takes to give fans a proper voice, and protect the game at every level, from grassroots to the elite” said:

Residents will have seen my comments last year where I said that football does not belong to the owners, it belongs to the fans. And this news is a welcome step to ensure that fans have a say in what happens. Last week I met with the Premier League where I made the exact same point.

You just have to take a look at Burnley Football Club. It’s very much a community club, driven by the passion of people in Burnley, Padiham and all of our villages who go to the Turf week in week out. And who support the club through thick and thin.

The new proposals to give fans a ‘golden share’ are particularly welcome. It means on everything from stadia to kit, fans will have a voice. And the independent regulator will ensure we don’t see a repeat of the failed bid for a European Super League, or clubs run in such a way that they face financial ruin.

The new regulator will have power to sanction clubs who break financial rules with a new owners' test to be introduced including a new 'integrity test' for owners and executives aimed at giving fans more say in the running of their club.

The Government’s response to the fan led review, published this week, included a number of references to Burnley’s financial management, noting the club has “been the most sustainably run football club in the Premier League since being promoted there in 2016”.

Football is nothing without its fans and for too long the football authorities have collectively been unable to tackle some of the biggest issues in the game.

The government took decisive action to conduct the fan-led review and today we have endorsed every one of its 10 strategic recommendations and the approach set out by Tracey Crouch.

I am exceptionally pleased the government has accepted or supported all the strategic recommendations of the review, including committing to legislation for a statutory independent regulator which will regulate financial resilience as well as ownership of clubs.

"This is an enormous step forward in providing much-needed reform for football.

The Premier League recognises and accepts the case for reform and for a strengthened regulatory system across football. We welcome the clarity from the Government about their position, and are committed to working with them during this next phase of consultation, although we will continue to maintain that it is not necessary for there to be a statutory-backed regulator.

A White Paper will be published by Government in the summer, setting out how the recommendations will be implemented in more detail.