Taking the Most Dangerous Offenders Off Our Streets 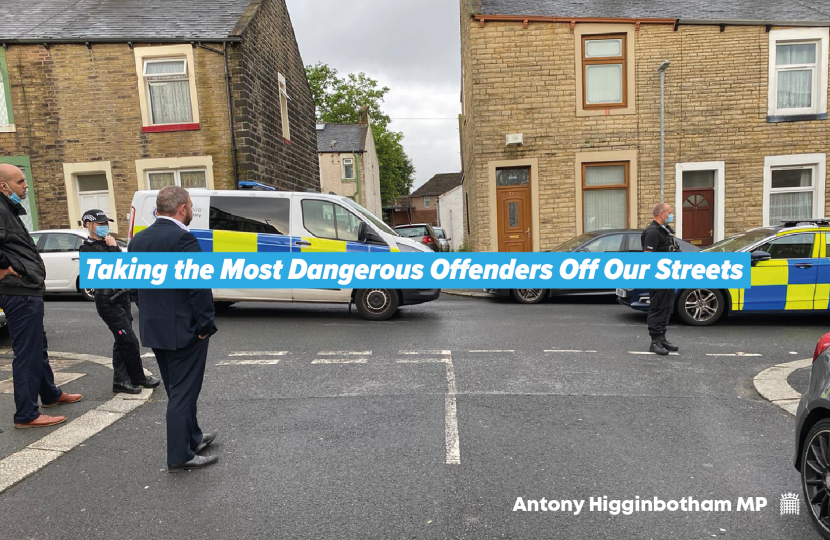 Our approach to law and order hasn’t been what it needs to be for too long. We’ve had a sentencing system that automatically releases dangerous people after just half their sentence, and an approach to criminals on the streets that has appeared too soft, and that hasn’t prioritised victims. Changing that isn’t the quickest thing, but it’s something that I have been determined to do since I was elected, and progress is being made. It should not be a controversial statement to say that it is right and proper that those who cause so much misery to others face the full force of the law, and then to put that into practice. It’s been my consistent message to Government Ministers, Lancashire Constabulary, and more recently our new Police and Crime Commissioner Andrew Snowden. That’s the way we will make sure that we deliver on our promise to cut crime and keep people safe.

This isn’t to say that our borough is a hotspot for crime, because it isn’t. But there are pockets of crime and criminal activity, and drugs remain a problem. That’s what we must tackle. My first priority was to give the police what they said was most important - more officers. An extra 20,000 was promised at the 2019 election, but my task was ensuring we got a decent share of those. And we are. We have an extra 199 in Lancashire already and hundreds more to come as recruitment of that target continues over the next 3 years. Locally, that has meant a direct increase in the size of our Neighbourhood Policing Team - the team responsible for tackling all those issues and working with communities. County line crime is of particular concern. It sees criminal gangs in cities like Manchester and Liverpool exploiting young people so they carry drugs into our area. These gangs are violent and dangerous, and their attempts to bring in drugs, and all the harm that goes with that, including serious violence and the exploitation of the vulnerable, is a real focus of our police force. One which I too am determined to see tackled. This is what I raised in Parliament on Monday. I asked the Minister for Crime and Policing to confirm that our local police force will continue to be given the resources they need to tackle the issue head on. Because whilst numbers are important, so is equipping the police to carry out the intelligence and investigation work required to crackdown on these organised criminal gangs.

On Tuesday morning I was able to join Burnley and Padiham police in one such dawn raid, where intelligence had been gathered about individuals involved in crimes relating to firearms, serious violence and cross border drug dealing – crucially action is being taken.

Part of that is building confidence in our judicial system by introducing tougher sentencing, something which has had my full support through the new Police, Crime, Sentencing and Courts Bill. It will not only give the police the powers they need to act but also toughen up the sentencing laws which for too long have needed reform. I'm determined to do what I can to make Burnley and Padiham safe for everyone - taking the most dangerous offenders off our streets and working with the Police to give them all the resources that they need in this fight.