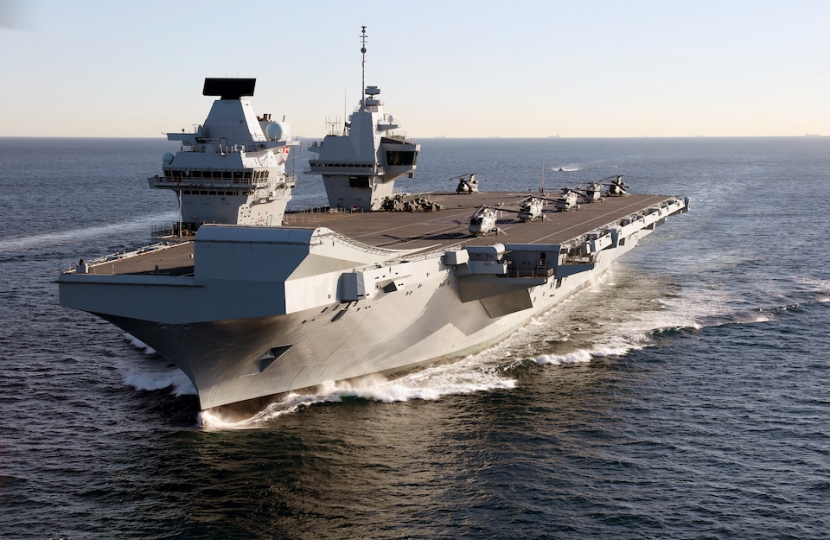 HMS Queen Elizabeth – the largest ship ever built by the Royal Navy – will depart for its first operational deployment next month in a mission that will "fly the flag for Global Britain".

The £3bn aircraft carrier will sail as part of a Carrier Strike Group consisting of six Royal Navy ships, a submarine armed with Tomahawk cruise missiles, a US destroyer and a frigate from the Netherlands. On board will be an air contingent of 8 RAF F-35B stealth fighter jets, 14 naval helicopters, a company of Royal Marines and additional jets from the US Marine Corps.

This deployment represents the largest tasking of Royal Navy vessels in a generation and will demonstrate to both our allies, and adversaries, our commitment to maintaining the rules-based international system that global trade and our economic prosperity depends on. And we know from the actions taken by countries like Iran in the Gulf, where the Stena Impero was seized, how important that is."

It also represents a fantastic opportunity for our armed forces personnel, be they sailors, aircrew or Royal Marines. Training with foreign nations, and sailing the globe, highlights the enormous variety and opportunities that are on offer from a career in the military.

As a representation of the ‘Indo-Pacific tilt’ in the UK’s foreign policy the Carrier will visit Japan, South Korea, Singapore, India and the wider region to engage in a series of events to maximise bilateral relations promoting trade and political alliances. The ship will also conduct a series of joint exercises with allies to interoperability and enhance capabilities to defend against shared threats and protect our democratic values.

Throughout the deployment, the UK will also support freedom of passage through vital global trading routes and demonstrate commitment to a recognised international system of norms and behaviours that benefit all countries. It will also help to establish a maritime partnership with India to support our mutual security objectives in the Indian Ocean.

When our Carrier Strike Group sets sail next month, it will be flying the flag for Global Britain - projecting our influence, signalling our power, engaging with our friends and reaffirming our commitment to addressing the security challenges of today and tomorrow.

The entire nation can be proud of the dedicated men and women who for more than six months will demonstrate to the world that the UK is not stepping back but sailing forth to play an active role in shaping the international system of the 21st century.

During the 28-week deployment, ships from the group will visit more than 40 countries for more than 70 engagements, including an exercise marking the 50th anniversary of the Five Power Defence Arrangements with Malaysia, Singapore, Australia and New Zealand.

It comes after Prime Minister Boris Johnson said last month that the Indo-Pacific region will become Britain's defence and foreign policy focus as it reconsiders its place in the world order after Brexit.