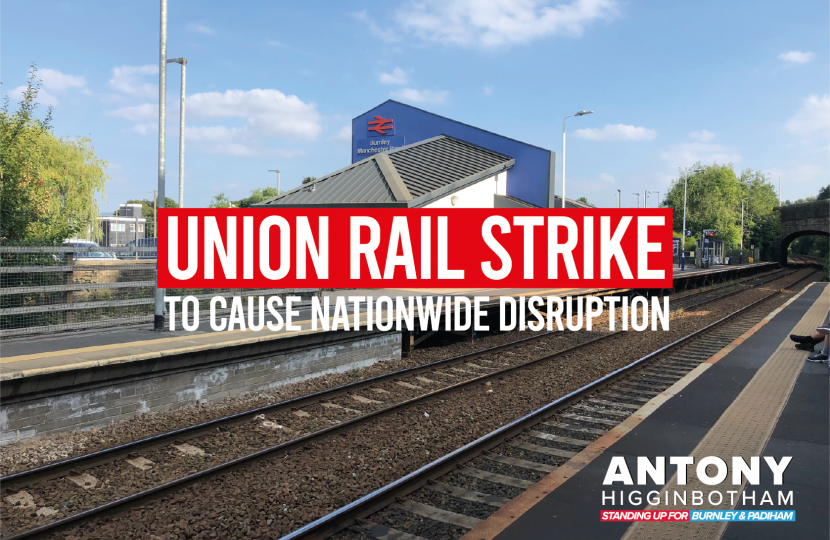 Rail passengers will be hit by major disruption on 21, 23 and 25 June as the National Union of Rail, Maritime and Transport Workers plan to strike after talks over pay and redundancies fell through.

In what some are calling the “biggest rail strike in modern history" more than 40,000 staff from Network Rail and 13 train operators are expected to take part.

The dispute over pay involves dozens of different staff categories - including train drivers, who earn up to £70,000 a year, demanding an 11% pay increase to help with the cost of living.

It comes after the unions rejected the 2% increase offered by the Government earlier this year.

Asked his view, Antony Higginbotham, Member of Parliament for Burnley and Padiham said:

Throughout Covid the taxpayer stepped in to the tune of £16 billion and ensured no jobs were lost in the rail sector, at a time when many saw pay reduced to 80% whilst on furlough, and others found themselves out of work.

For rail unions to now insist that they want even more taxpayer support - which is exactly what they are asking for - at a time when inflation is running high and people need Government to be cutting taxes not put it up, looks very out of touch.

I'd encourage those unions, and their political supporters in the Labour Party, to get round the table and find a sensible solution that protects jobs and pay, whilst also being fair to the millions of hard working taxpayers across the country.

So far industrial action has received support off a number of Labour MPs including Rebecca Long Bailey MP, John McDonnell MP, Diane Abbott MP and Ian Lavery MP – all of whom have been accused of taking money from the Union in political donations.