A week of reflection 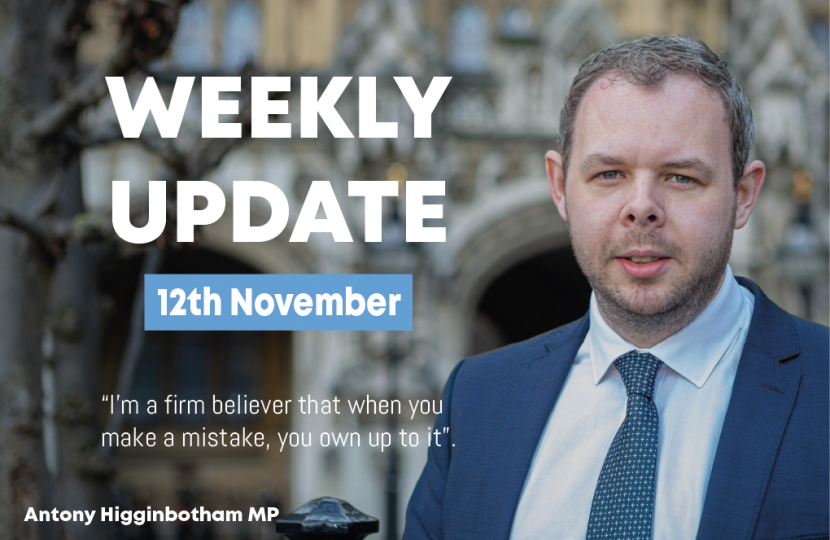 When I stood for election in 2019 it was on a promise to do things differently. To listen to residents; to be accessible; and to be your voice in Parliament. This is what drives me day after day, week after week.

But last week I made a mistake. And I’m a firm believer that when you do make a mistake, you own up to it.

It came during the debate, and vote, on standards in Parliament and the specific case of Owen Paterson. I’ve never spoken to Mr Paterson before – I know him about as well as every other resident here in the borough knows him.

And when I read the Standards report into his conduct during 2016 and 2017 I was left in no doubt that he had done wrong, and the sanction proposed was appropriate.

But Parliamentary process means that if an amendment is tabled you first need to vote on this, before any sanction. And this was the case. The amendment that was tabled proposed the establishment of a new, cross-party committee of MPs, which would review standards rules across Parliament to see if they are right. It would ask questions about whether there should be a right of appeal to decisions reached by the Commissioner – as there is in other professions; whether the current patchwork of bodies should be streamlined to make it more efficient – as there are at least 3 looking at these issues and it has taken years for the conduct to be investigated; and whether the rules as they currently stand generate trust. On this latter point, I’m not convinced they do.

As just two examples, there is a current, sitting MP, who was convicted of a serious crime having threatened to throw acid in a person’s face, and as they are waiting for an appeal to go through the Crown Court they can sit as normal and vote on laws. And there is another MP, again still sitting and voting on laws, who tried to acquire a Class C drug from a constituent, and was found to have no standards case to answer. Neither of these seem to me to be appropriate actions for a sitting MP, and that the Standards system hasn’t yet been able to deal with them is wrong in my eyes.

But here is where I made an error of judgement. Rather than seeking to separate out this broader question of reform from the specific case of Owen Paterson, I allowed the two to be conflated. The old maxim goes that justice cannot just be done but must be seen to be done too. That didn’t happen last week. I was wrong, and in the same circumstances I would not vote in the same way.

This week is also our week of Remembrance. In every corner of our borough, from the town centre of Burnley, to Memorial Park in Padiham, and in all our small villages, war memorials stand as a testament to the sacrifices made by those who paid the ultimate price in pursuit of our collective freedom.

On Sunday, as every year, will see communities from across the borough gather to pay their respects to those who have made that sacrifice to defend our islands. This collective act of remembrance is one of the things that defines us as a nation, demonstrating our reverence for those who fought for the rights and freedoms we hold dear to us. And as first-hand accounts of the First and Second World War become ever rarer, it is an important event to keep our history alive, and ensure younger generations still hear of the events that took place.

I would encourage all residents to join a Service of Remembrance this Sunday, and to wear a poppy with pride.

You can buy you poppy at supermarkets across Burnley and Padiham, in Charter Walk, or online at www.poppyshop.org.uk where other items are also available. Donations can also be made to the Royal British Legion at www.britishlegion.org.uk.