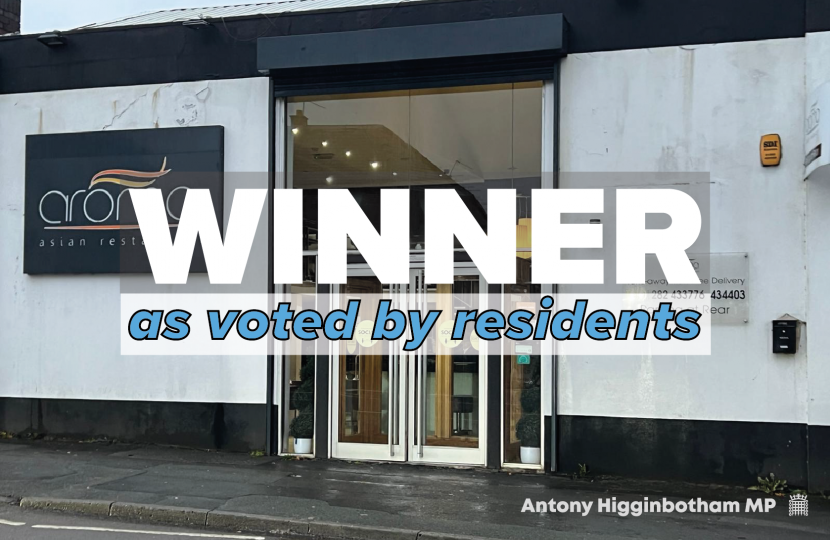 Burnley and Padiham’s nomination for the prestigious Tiffin Cup has been chosen by residents.

The Tiffin Cup is a competition held each year to find the most popular South Asian restaurant in the country, with each MP having the ability to nominate one curry house from their area.

In response, Antony Higginbotham MP launched a local competition to allow residents to choose the nomination to go forward for Burnley and Padiham.

And with over 100 entries, the Aroma Restaurant on Church Street came out top, as voted for by members of the public.

Commenting on the nomination Antony said:

We have so many fantastic Asian takeaways and restaurants within the borough so it was hard to choose just one. That’s why I asked residents to vote for who our nomination should be for this award.

Just as I expected, there was quite a selection from right across the borough, showing just how many amazing places we have in Burnley and Padiham.

I’d like to congratulate Aroma Restaurant for topping the poll and wish them all the best in the national competition.

Aroma will now be Burnley’s official nomination for the prestigious Tiffin Cup – a competition to find the best South Asian restaurant from across the UK.

Once nominated, they will, alongside all other restaurants from across the UK, be visited by a mystery diner who will shortlist the best 10. These 10 will then be invited to a cook-off with a judging panel, chaired by Celebrity Chef Ainsley Harriott MBE.