A Budget for Burnley and Padiham 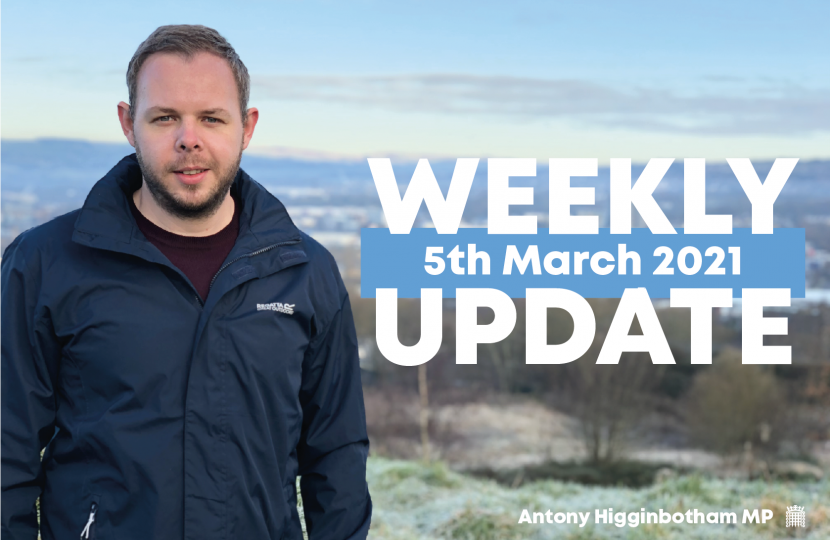 12 months ago I sat in a packed House of Commons Chamber to hear the Chancellor deliver his first Budget. Whilst I had only been in Parliament for a few months, Rishi Sunak was only a matter of days into the job and had worked at breakneck speed to set out how the Government would respond to the economic challenges of Covid.

Earlier this week, I was back in the Chamber for a Budget but under very different circumstances. The Chamber had only a fraction of the MPs who would normally be there and the Chancellor had to set out the final stages of the economic response to Covid, get our public finances on a stable footing, and plot a course for our recovery.

In all three I think the Chancellor made the right calls. It was clear listening to the Budget that the Treasury has pulled out all the stops, left no stone unturned, and directed the enormous financial muscle of the Government at building back better.

With the extension of the furlough scheme until the end of September, families and local businesses have the certainty they need as we start to see trading resume. And for those in the hospitality, retail and leisure sector, badly hit by necessary restrictions, a raft of supportive measures announced that mean we don’t only have the date for re-opening, but those businesses have the necessary Government support to do so too.

But we do have to be honest about the economic impact that Coronavirus has had too, and it is right that a plan is prepared for repairing the public finances. This is an essential part of maintaining the market confidence that has allowed such significant Government borrowing to get through this period.  And making sure that the economy is managed properly is something I promised to you during the General Election campaign. Not the reckless spending that was on offer from the Labour Party, but Conservative management which meant we entered this economic crisis in a way which has allowed us to wrap our arms around the country. And management that ensures we will be able to do the same again the next time a crisis hits.

It is with this in mind, as a low-tax Conservative, that I agree with the tax measures announced. Income tax rates are not to be increased, with a freeze on all personal tax allowances instead because we know that during the current climate increasing taxes on individuals is not the right thing to do. That means that no one will see their pay packet reduce.

But from 2023 corporation tax – a tax on profits – will be increased from 19% to 25% for the largest corporations who can bear the burden. This still represents one of the lowest rates in the G7 and, importantly, will only apply to those large businesses that are making the largest profits. Our smaller SMEs, including hundreds across Burnley & Padiham, will benefit from a reduced corporation tax rate so they are incentivised to grow.

Growing our economy will be our best response to paying down our debt though and the Chancellor announced a measure that has never been tried before in the UK – the Super Deduction. For areas like Burnley, which have a significant manufacturing sector this could be transformational. It means local businesses in everything from aerospace to construction are incentivised, through the tax system, to invest in new equipment and machinery – boosting their productivity, creating jobs and powering up our local recovery. I have been lobbying the Government intensively to offer full tax relief on new investment because it’s how we back business, and this has more than delivered on that.

Finally turning to the levelling-up agenda, which is something I care deeply about. A few weeks ago I was on BBC Politics North West and the Shadow Business Minister said that when Labour was in Government they invested in the cities. As this Budget shows, this Government invests in the towns too and nothing embodies that more than the Levelling Up Fund and Community Renewal Fund.

Through these two funds we in Burnley and Padiham can bid for tens of millions of pounds to regenerate our town centres, boost the high street, improve our infrastructure and create the environment needed to make our area a place to live, work and invest.

They have opened the possibility of tens of millions of pounds of investment here in Burnley and Padiham from this Government. And I’m delighted that having raised our needs in the House of Commons on so many occasions, and lobbying Ministers behind the scenes, we have been placed in the top priority group for both these funds.

Burnley and Padiham is no longer forgotten and this is a Budget that will boost our businesses, support families and gives us the Government focus we deserve.

Backing our businesses to create a thriving local economy