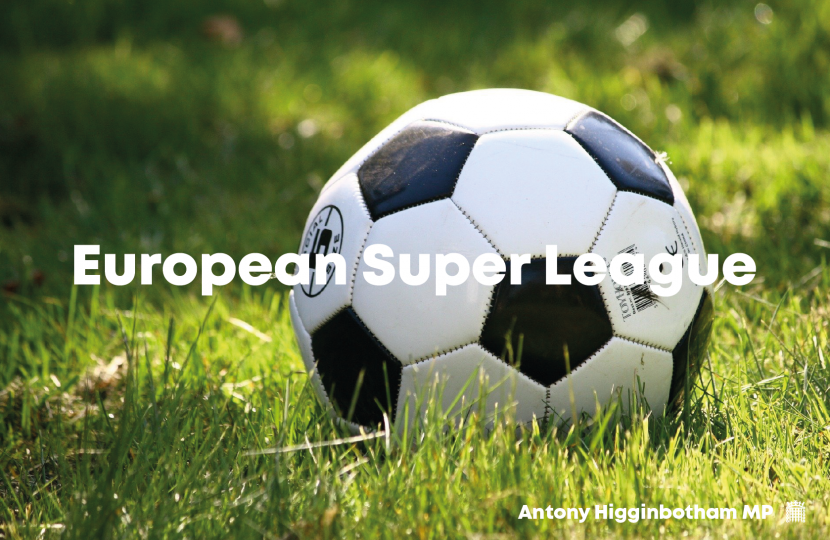 With MPs representing every single part of the UK the House of Commons is not normally a place where everyone agrees about football. The normal club rivalries exist there as they do across the country. But earlier this week the whole House came together, without exception, to criticise the ill-thought through proposals for a European Super League.

Within hours of the news breaking, the Secretary of State responsible for sport was in the Chamber announcing the steps Government was taking to protect our national game and I was one of many colleagues who spoke in support of the actions being taken. The Prime Minister was convening meetings with the FA, Premier League and Supports Groups; a fan-led review had been accelerated; and all options – including legislation if needed – were on the table.

But it wasn’t just in Parliament. Players, journalists, fans, commentators and more all came together to condemn the proposals.

There could be no ambiguity in the minds of those club owners about what the views of people across the country were on this proposal. I’ve seen the reports that suggest this caught those owners by surprise; that they somehow thought people would either like the proposals or just accept them. But this shows a fundamental lack of awareness about what football means to us, and no knowledge about how clubs have grown and developed as important pillars in our local communities.

That is particularly important for us in Burnley. As a founding member of the English Football League, Burnley Football Club has been with us all for over 138 years, still providing the excitement and joy to thousands who regularly watch the game in Burnley and Padiham.

As I’ve said many times in the Commons Chamber, we’re not a city like Manchester or London, where a football club is simply a nice addition. Turf Moor sits proudly in our town centre, and it plays a huge part in our local economy and culture. From driving thousands of people into the town centre to create a bustling atmosphere that sustains so many of our pubs, restaurants and hotels; to showcasing Burnley on the world stage.

The proposals that were announced have all the hallmarks of competitions over in the US like the NFL, which may offer bumper pay packets to owners but none of the competition that we expect from sport. Football is about the excitement that you get when you see the underdogs rise up through a tournament; and supporting your club through thick and thin.

As a Conservative I believe we have an enduring obligation to protect our national institutions and culture. It’s what makes our country great. And in 2019 I stood on a manifesto which promised to establish a fan-led review of football governance to do exactly that, something which this episode in football has only shown is more important than ever before. Whilst the plan was to wait until fans were back in stadiums before beginning this piece of work, allowing the game to get back to normal, the ESL announcement meant that was no longer possible.

Fans should always be front and centre of the game, because without them it’s nothing. The review, which will be chaired by a former Sports Minister, will look at all aspects of the game. From the financial sustainability of men’s and women’s football and how the pyramid works, to the merits of an independent regulator and, critically, how fans can have an even greater say over oversight of the game.

It was welcome news on Wednesday to see that all six English clubs have withdrawn from the ESL proposal following the pressure applied but it goes to show why a radical shake up of how top clubs operate is long overdue.