The rules apply to everybody says Antony 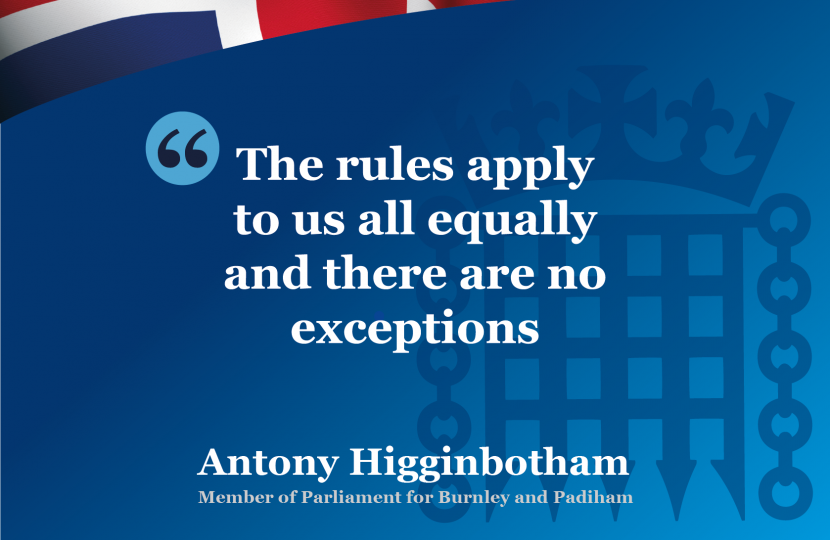 Writing this column is always difficult because sometimes events can overtake things quickly. And this week that is definitely the case. Having written my column earlier in the week, I couldn’t not change it to comment on what has unfolded since – whilst also keeping in the other part which I think is important.

The video that is now online, which implies that contrary to what officials were stating there was a staff party in Downing Street is nothing short of disgusting and indefensible. The video was recorded at a time when everyone locally was having to decide which family members or friends they could spend Christmas with, because we couldn’t mix as normal; or whether it had to be spent alone. I think about my own family, where I went without seeing my parents, grandparents, siblings. And of the sacrifices we made as a family, when we were told we were unable to grieve as we would have wanted when a loved one passed away.

That a group of people seem to have decided those same rules did not apply to them, despite their role in determining them, is sickening. The Cabinet Secretary, as Head of the Civil Service, can and should investigate this thoroughly but I have been clear to Ministers that those who have done wrong in that way should no longer be employed at the public expense.

Residents will also now have seen the news about additional measures being brought in to control the spread of the Omicron variant of Covid-19. I have always supported measures to ensure our healthcare system can care for those who need it, and to avoid the NHS being overwhelmed with patients. It is why I reluctantly accepted limitations on our freedoms in 2021 and early 2021.

The proposals announced just a few hours ago (at the time of writing) seem to have gone further, anticipating what the evidence might be rather than what it is today. There is, of course, always an element of this when you try to get ahead of a potential issue and I fully accept the difficult position Ministers and public health officials are in. But I am yet to be convinced that these are necessary measures, nor that there is a clear strategy to see them end. I will be engaging with Ministers over the coming days on this and will form a decision next week ahead of the vote. As ever, I would encourage all residents with a view on this to let me know.

Finally, I want to comment on what was originally the theme of this column, and that is the local role of an MP. Because I’m a firm believer that the first role of an MP is to be a local champion for their constituency. That’s why residents will continuously see me stand up in Parliament and talk about the issues that local people bring up with me or meet with Ministers to discuss what more we can do for Burnley and Padiham. We need somebody who shouts about how great we are and focuses not just on the problems that we need to solve but the solutions too. It’s why I first became involved in politics, and Burnley and Padiham is and always will remain my number one priority.

In that vein, on Tuesday this week I met with the Policing Minister, Kit Malthouse, to talk about the new Drugs Strategy and how we can work together – with the PCC – to make Burnley the first county-lines free borough in Lancashire.

And on Thursday this week we saw another Minister come to our borough to see what we have to offer. This time it was the Minister for Skills and Further Education, Alex Burghart. He came to see the facilities we have at Burnley College, and speak to apprentices, adult learners, and other students about skills and education. And that means when I lobby the Department for Education on issues like our Institute of Technology bid, Ministers know exactly what I’m talking about because they’ve seen it for themselves.

I’ve also been running a Christmas card competition to find a design for my official Christmas card. By involving all of our local schools, as I did last year, I’ve been able to see once again the overwhelming the level of talent and creativity that we have in our borough. And on Friday I will be announcing the two winners (one Primary aged student, and one Secondary aged student) and presenting them with their prizes.

And lastly as many will have seen I spent Small Business Saturday on the 4th December braving the weather as I visited local businesses in Burnley town centre, encouraging people to shop local. This weekend I will be doing the same in Padiham – encouraging people to explore the variety of independent shops and retailers we have as they search for Christmas gifts. The high street there has come on leaps and bounds over the past two years, with a full renovation bringing it back to life, so please do take a look at the video I post online on Saturday to see what is on offer.